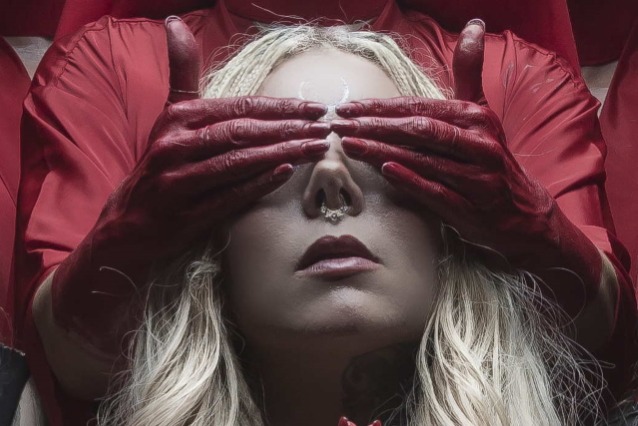 In an April 9 interview with Zippo Encore's Jose Mangin, IN THIS MOMENT singer Maria Brink described herself as a shy and reserved person offstage in contrast to her larger-than-life persona in the spotlight.

"It's crazy," she said (see video below). "I don't even know 'shy' is the right word. I get social anxiety, I guess. I've been practicing social distancing before this [coronavirus pandemic] all started; that's just the type of person I am. But, yeah, in social situations, I can get nervous, or just anxious, I guess, the word is. But for stage, it's crazy — yeah, I just don't get nervous. It's like something kind of happens — it's this powerful side of myself. Which I have in real life too, when I have to channel it. But I don't obviously walk around like that."

Last month, Brink told Alternative Press that she is "like a cat" when she is not performing with IN THIS MOMENT. "I hide in corners, in the shadows," she explained. "I have dimmers on all the lights in my house. I'm a super-reclusive type of person. I don't know if the word is 'shy,' but I really love my privacy.

"Doing what I do, I give so much of my soul, heart and energy," she added. "And I like to balance it with my privacy, you know? And I think there's something so amazing about mystery. It lets your imagination work on the exciting stuff."

IN THIS MOMENT's latest album, "Mother", was released on March 27. The disc was once again recorded at The Hideout Recording Studio in Las Vegas, Nevada with producer Kevin Churko. The LP contains three covers, including the STEVE MILLER BAND's "Fly Like An Eagle" and QUEEN's "We Will Rock You", which features vocal backup from HALESTORM's Lzzy Hale and THE PRETTY RECKLESS's Taylor Momsen.

Last month, IN THIS MOMENT announced that its U.S. tour with BLACK VEIL BRIDES, DED and RAVEN BLACK that was to start March 24 in Orlando, Florida was being postponed due to the coronavirus crisis.