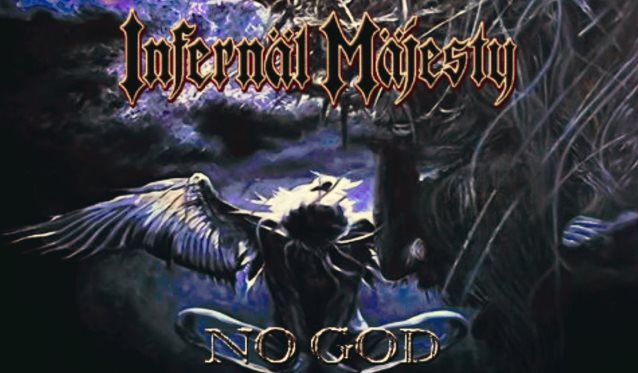 An audio snippet of the new song "O Sons Of God" from long-running Canadian metallers INFERNAL MAJESTY is available below. The track is taken from the band's forthcoming album, "No God", tentatively due before the end of the year.

INFERNAL MAJESTY vocalist Christopher Bailey recently stated about the band's new CD: "It is our best work since 'None Shall Defy' [1987]. In my opinion, it's a combination of 'Unholier Than Thou' [1998] and 'None Shall Defy' through together.

"The [first] video is called 'House Of War'. Basically, it's about what's been going on with all the shit in this world in this day and age.

"When we started work on the new album, a couple of the songs that will be on it were already in the works on the 'Demon God' demo [2007]: 'Nation Of Assassins' and 'Systematical Extermination'. Now, we took 'Systematical' and we took 'Nations'… They weren't just re-recorded.

"This album we spent three years writing. It is our best work since 'None Shall Defy'."

A trailer for the soon-to-be-released "House Of War" music video can be seen below.

In a 2006 interview with Metal-Rules.com, Bailey blamed his split with INFERNAL MAJESTY on the fact that Terror and Hallman "had been quietly collecting my royalties [for INFERNAL MAJESTY's classic debut album, 1987's 'None Shall Defy'] while denying that they were receiving even their own royalties… period — and instead of working something out, they chose to smear me, replace me and spread misinformation to the new band members and others about this issue." Bailey also shot the down the possibility of him ever rejoining INFERNAL MAJESTY, explaining: "It was devastating news to find this out about my co-band members and so-called 'friends,' and their actions afterwards made it like being decapitated and backstabbed."

INFERNAL MAJESTY performed "None Shall Defy" in its entirety with special guest vocalist George "Corpsegrider" Fisher from CANNIBAL CORPSE on August 20, 2011 at Rickhaw Theatre in Vancouver, British Columbia, Canada.

Asked in an interview why INFERNAL MAJESTY was dropped by Roadrunner Records after the release of "None Shall Defy", Steve Terror said, "At the time Roadrunner was just starting out in the States so they didn't have the clout that they have now. There have been many bands that have been unhappy with Roadrunner and I don't think we are any different. I think what really happened was, [former INFERNAL MAJESTY drummer] Rick [Hughes] went to New York to the label and told them that we didn't want to tour, but to put out a second album instead. The rest of us didn't find this out for about five years after the fact. The label wanted bands that wanted to tour so they became disinterested with us. You have to remember that at the time labels where signing everyone in sight and not really paying much attention to each band."