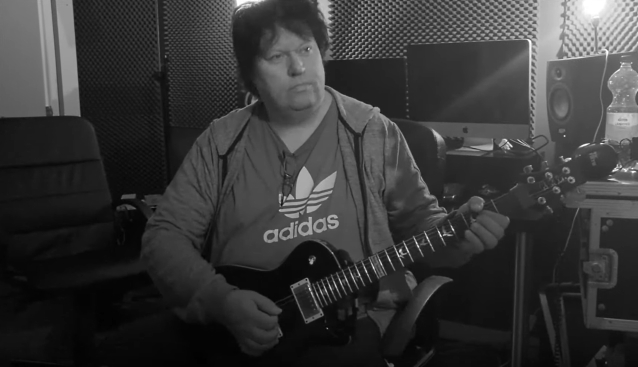 To coincide with the campaign launch, INFINITE VISIONS has released a playthrough video for the song "You Rock My World", a track from its recently completed four-song demo, which was mixed by Dani G (RAGE, FIREWIND). "You Rock My World" was specifically chosen as the song to kick off the crowdfunding as it is a song for the fans and about the fans. The video features all five members of the band: Timo Tolkki (guitars),Erik Kraemer (vocals, SIMULACRUM),Pawel Jaroszewicz (drums, ex-HATE/VADER),Jimmy Pitts (keyboards, ETERNITY'S END/NORTHTALE),and Pierre-Emmanuel Pélisson (bass, CIVILIZATION ONE/ex-HEAVENLY).

The band states: "INFINITE VISIONS are ready to record their debut album and need your help to make this happen! They require a minimum of 10.000 euro to complete the album and pay for related costs, such as: recording, mixing, mastering, album artwork & graphic design of layout, band photos.

"Although a large number of fans have been waiting for some classic metal songs from Timo, record sales aren't what they used to be & the music industry has changed considerably. This change has resulted in bands getting smaller advances from labels and a limited budget for recording. With a desire to release only the best possible album — and not wanting to disappoint their fans — Timo and INFINITE VISIONS turn to crowdfunding."

INFINITE VISIONS is also taking this opportunity to announce Pierre-Emmanuel Pélisson as its new bassist. Pierre has over 20 years experience in both the studio and stage, having recorded and performed with several artists including HEAVENLY ("Sign Of The Winner" and "Dust To Dust" albums) and CIVILIZATION ONE ("Revolution Rising" and "Calling The Gods"). Pierre takes over bass duties from Jari Kainulainen, who left the band earlier this month for personal reasons.