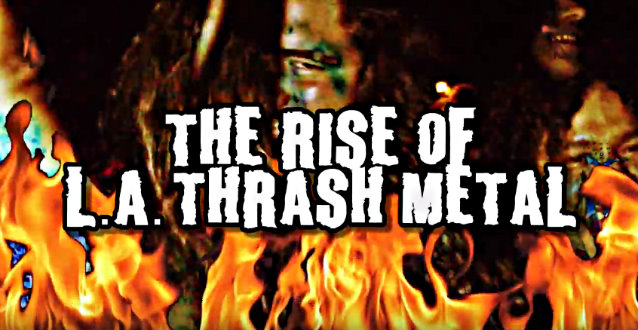 "Rise Of L.A. Thrash Metal", the third title in the "Inside Metal" series, will be premiered on Monday, June 19 at 7:00 p.m. at the Regency Valley Plaza 6 Theater in North Hollywood, California. This is the only screening date that is scheduled and the filmmakers have set aside a limited number of tickets available to the public.

"Rise Of L.A. Thrash Metal" will be available on DVD and major streaming outlets late this summer through MetalRock Films as a two-part DVD. This documentary film focuses on the Los Angeles thrash metal uprising of the early/mid-'80s and is the follow-up to the first two Inside Metal titles, "The Pioneers Of L.A. Hard Rock & Metal" and "L.A. Metal Scene Explodes". (All are two-volume DVDs available for streaming and airing on select cable channels.) The fourth "Inside Metal" title will be on the Bay Area metal scene of the '80s and it's currently in the editing stages and planned for an early 2018 release.

To purchase advance tickets, please contact [email protected] Advance tickets can be purchased in advance for $12.00 each via PayPal. Tickets may be available for purchase at the door but the filmmakers expect it to sell out so they suggest purchasing tickets in advance.