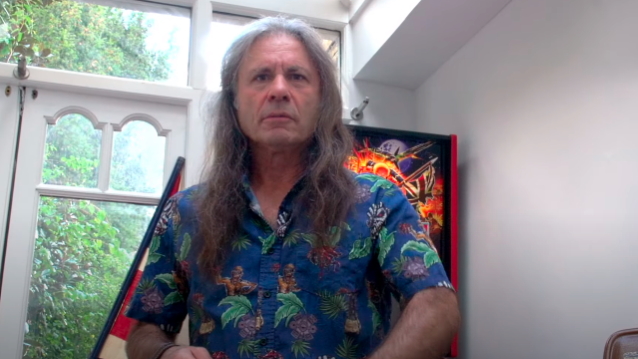 IRON MAIDEN Has 'Been Working Together A Little Bit In The Studio,' Says BRUCE DICKINSON

British heavy metal legends IRON MAIDEN have shared a new video message from singer Bruce Dickinson in which he discusses how he and his bandmates have been dealing with the coronavirus pandemic and their plans for the coming months.

He said in part: "We've all had a bit of a torrid time — everybody in the whole world, MAIDEN included. We wanna be out on tour.

"A lot of things haven't happened this year — that's blindingly obvious — and it's very, very frustrating. However, we do have plans. In the meantime, what are we doing? Well, we're doing bits of writing. I'm talking to Steve [Harris, IRON MAIDEN bassist]. We've been working together a little bit in the studio. On what, I can't tell you, 'cause they'd have to kill me.

"All our crew are all on board with us," he continued. "Obviously, after the cancelation of the shows and rescheduling of the shows this year, all of our lives were canceled. The killer crew is still on board for when we resume normal service next year, whenever that is.

IRON MAIDEN's longtime manager Rod Smallwood recently urged everyone to listen to the experts when it comes to deciding how to respond to the coronavirus crisis.

The British heavy metal legends have been forced to postpone or cancel a number of shows this spring and summer as a result of the coronavirus pandemic that is sweeping the globe.