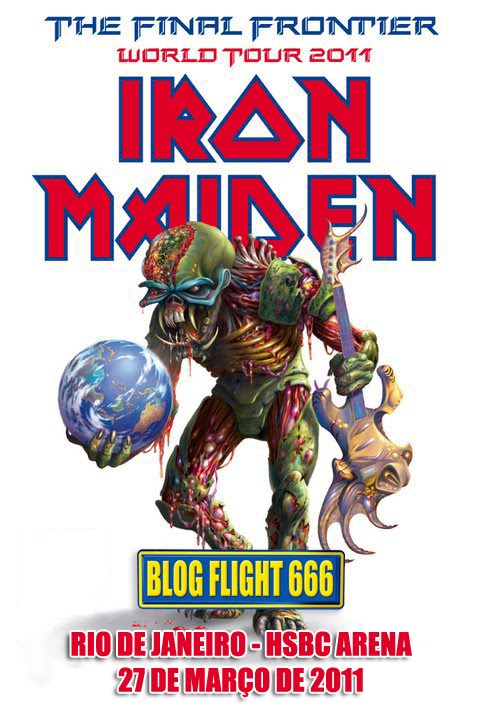 More footage has been posted online of last night's (Sunday, March 27) ill-fated IRON MAIDEN concert at HSBC Arena in Rio de Janeiro, Brazil, when a surging crowd of fans caused a barricade to collapse during the band's performance, forcing the group to cancel the rest of the show. The incident happened during the first song of the band's set, "Satellite 15 ... The Final Frontier", when the barrier separating the fans from the stage broke and the crowd rushed forward towards the members of the group. IRON MAIDEN's lead singer, Bruce Dickinson, noticed the commotion and urged the crowd to take it easy. The members of the band then stopped playing and Dickinson explained that they would resume in the concert in ten minutes after the fence had been repaired. The audience waited, but after 20 minutes, boos became more audible as the crowd began losing its patience. Dickinson then returned to the stage to break the bad news. "The fence is completely broken. We do not want anyone to get hurt," he said.

Dickinson told the crowd that IRON MAIDEN would play at HSBC Arena at the same time on Monday (March 28),and that the fans should pick up a bracelet before leaving the venue giving them access to tonight's show.

Concert promoter Evenpro subsequently released a statement explaining that the show was being postponed until the next day "due to technical problems with the barricade provided in front of the stage. This decision was taken by HSBC Arena in agreement with the band's staff, because it's their priority not to put fans' safety in risk. IRON MAIDEN will stay in Rio de Janeiro one more day to be able to make the show and not leave Rio de Janeiro out of this leg of 'The Final Frontier Tour'. All the fans at tonight (Sunday) concert must bring their tickets stub tomorrow to be allowed entry the concert. . . The band are naturally very sorry for any fans that can't return tomorrow but promise a great and safe show tomorrow Monday for those who do . . . As much as the band wish to play for their fans, the safety of each one of those fans is always paramount."

Barricade breaking down during opening song of IRON MAIDEN's set:

Brazilian TV coverage of the incident: