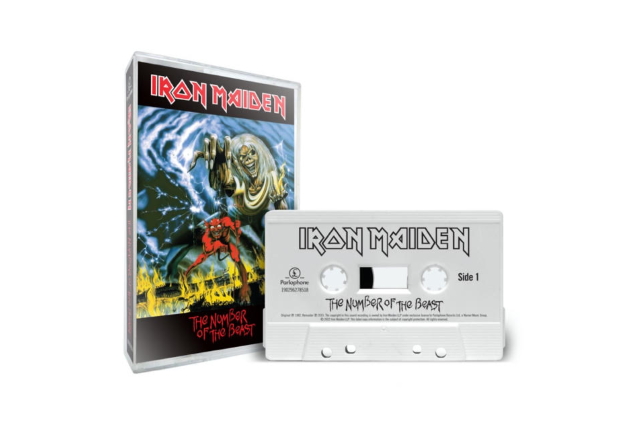 BMG will mark the 40th anniversary of IRON MAIDEN's third album, "The Number Of The Beast", with a commemorative cassette release that will be available in the U.S. as an independent record store exclusive on March 25, 2022.

For more info on stores and availability, go to this location.

This seminal recording, first released in the U.K. on March 22, 1982 catapulted IRON MAIDEN to international stardom and set them on course for the spectacular trajectory of success which the band continues to enjoy and develop to this day.

The cassette is comprised of the 2015 remastered recordings of the original eight songs on the album as listed below, with front cover color art based on the 1982 C-60 cassette release plus a redesigned and updated inlay. Ultimately, it's a tribute to a watershed album that sold in its millions in record stores all around the world; a celebration of those bygone times and a fitting souvenir for the fans who have loyally followed the band ever since.

Two years ago, IRON MAIDEN bassist Steve Harris reflected on the pressure he and his bandmates felt while writing and recording "The Number Of The Beast". He said during an appearance on SiriusXM's "Trunk Nation With Eddie Trunk": "It was the fact that we'd used up the material, pretty much, from the times before that. Before the first album [1980's 'Iron Maiden'], it was a four-and-a-half-year period before we got signed and all that. And so we had a lot of material that we were doing that was already there, playing in the live set, so we recorded all that. And the second album [1981's 'Killers'] was only, I think, three new songs that were on that album, 'cause the rest of it was stuff we'd been playing [live] as well. So when you get to the third album, it's, like, 'What are we gonna do now?' But that pressure was pretty fierce pressure, and we didn't have a lot of time either. Back in those days, it was just album-tour, album-tour and whatever, and it just worked. So we thought, 'You know what? That worked really well. We'll do the same thing again.' … It has to be done. And if you've got a tour coming after it, that's it — it has to be done."

Released in March 1982, "The Number Of The Beast" was IRON MAIDEN's first LP to feature vocalist Bruce Dickinson and the songwriting contributions of guitarist Adrian Smith, who had joined the band two years earlier.

"Obviously, all those elements all thrown into one, it was a pretty scary time in a way, but it was also therapeutic in the sense that we actually went in and just had to come up with the goods," Steve said. "It's, like, 'That's it. It's crunch time. You've gotta do it.'"