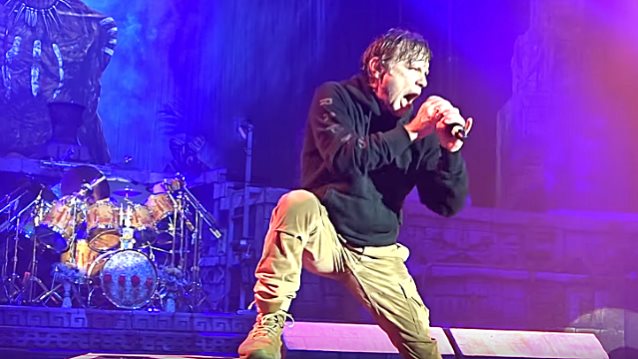 British heavy metal legends IRON MAIDEN used their performance in Cardiff on Wednesday night to pay tribute to the people who died in Monday's terrorist attack in Manchester.

While introducing one of the songs from the band's latest album, "The Book Of Souls", MAIDEN singer Bruce Dickinson told the crowd: "There are various people running around the world at the moment with their fingers on various buttons and all this bullshit. It makes you wonder a little bit as to whether or not we are entirely safe in the hands of lunatics. But regardless of all that, we feel entirely safe in the hands of the eight thousand lunatics here tonight.

"So, with respect to the — I'm only gonna refer to it probably once — the awful shit that happened the other night in Manchester, the biggest response that we can make to the bullshit and the people who want to hate and who want to destroy is to give them back love and joy and rock and roll."

Eariler in the week, IRON MAIDEN issued a statement expressing the band's shock at the Manchester terror attack, but promising fans that their remaining U.K. dates would go ahead.

The legendary heavy metal band has two more shows left on its U.K. tour: at London's O2 Arena on Saturday and Sunday.

The O2 has released a statement advising fans to turn up early. It reads: "Enhanced security is in place for all events. Please head down early and pack light as we only accept small bags into the area.

"Along with everyone else, we are shocked and saddened by the terrible tragedy in Manchester. Our thoughts and prayers are with those affected and their families."

IRON MAIDEN's "The Book Of Souls" world tour will return to North America for an extensive series of arena and amphitheater shows in June and July. Support on the trek will come from GHOST.