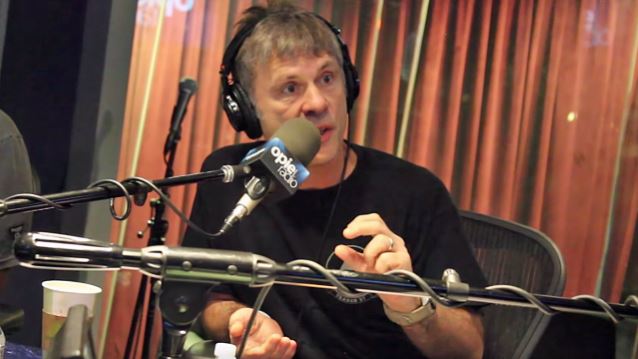 IRON MAIDEN frontman Bruce Dickinson, who was given the all-clear in May after being diagnosed with tongue cancer in December 2014, was interviewed on August 31 edition of the "Opie Radio" talk show. A 19-minute clip of his appearance on the program, where he discusses his cancer battle, can be seen below. A few excerpts follow (transcribed by BLABBERMOUTH.NET).

On how he found out he had tongue cancer:

"I actually diagnosed myself with exactly what it was six weeks before I went to the doctor, and I ignored what I thought I had, or what I thought I possibly might have, 'cause I was still finishing the [new IRON MAIDEN] album ['The Book Of Souls']. I thought, 'I'll get the album done and then I'll go see the doctor.' I had a lump in the side of my neck — kind of like when you get a cold."

On the cause of his cancer:

"The interesting thing is that there's an epidemic in tongue and throat cancers in guys over forty. There's a five hundred percent increase in this particular type of tumor. It's the human papillomavirus tumor, so it's the same as cervical cancer, it's the same virus that causes it, and the diagnosis is the same, but in guys there are no symptoms. So the first thing you figure out is that you get a lump in the side of your neck, usually, and that's actually usually a secondary tumor. And you go on to the doc, and [you say], 'I think I've got tonsillitis.' And the doc says, 'Ahh… Ooh, no, you don't. 'Oops. Who knew?' And since I've had the treatment, I've met, probably, half a dozen guys my age or younger, non-smoking, not abusing themselves or anything else like that, who all have this cancer. So it is really a men's health issue."

On whether HPV, which roughly 80 percent of people will contract in their lifetime without consequence, is transmitted by oral sex:

"In actual fact, the thing about the HPV virus is that people don't know a great deal about it. Yes, of course, it can be transmitted sexually and things like that. But, for example, and I don't mean to be flippant or anything, but you would expect therefore that lesbians would have an equally high incidence of it. No — their incidence is 25 percent less than men. It seems to be something that affects a certain number of men. HPV is a virus which the body… I mean, there's a 150, or something, strains of it, but there's only a couple that, really, you're interested in. And most of humanity has been exposed to it — eighty percent of us have all been exposed to an HPV virus — and we get rid of it. It comes, it goes; it comes, it goes. But, for some reason, and nobody knows why, in blokes, guys over forty, it can persist. And as it persists, that's when it does its little… And it's a cunning little beast. There's no test for it until you actually get a… The only test is doing a biopsy, and even then, the virus is not present. It's the remains of the virus that it leaves behind a little present that starts off… It leaves a little genetic code in there to start the thing, start off the cancer. But it also goes into the cell and switches off a gene called the TP53 gene, which is protective… It's basically the cell's self-destruct mechanism. So it's a clever little bugger."

On whether he was optimistic about his chances of beating the cancer when he first found out he had it:

"I went in and did all the research and had a look and said, 'Well…' All the information on it, it's all public domain, so all the medical papers are all out there, so you can have a quick peek. And you say, well, give yourself the best shot you can get. I've got a great set of doctors, and they were very confident. They said, 'We'll get rid of this for you.' And I went, 'Surgery?' And they went, 'Ooh, no. Radiation and then chemotherapy.' So I did both at the same time. [I did] nine weeks of chemo and three three-week cycles. So you just go along and sit there on a Monday morning and just get an armful of about… Lots of fluid and lots of water, and then they put the chemotherapy drugs in and everything else. And that'll last you for three weeks. And then I was doing five days a week radiation… If you're into measuring radiation, 66 grays, which is about 13 times lethal full-body dose if you've got it distributed through all of you. But the machinery they use now, [it's] very modern, highly accurate, very metered dosage to exactly all the bits that you need and hopefully sparing a lot of the other bits that in days gone by, maybe even ten years ago, would have been fried, like, permanently. So things like saliva glands and stuff like that, now [they are] all coming back and working and they all return to normal. But back in the day, you would have lost those forever, which is horrific."

On what stage cancer he had:

"I was a stage three. But my doctor said to me, 'Look, don't worry about the staging, because I'd rather have stage three of your cancer than stage-one lung cancer.' Staging is more of an academic way of definining what it is. So as soon as any cancer moves to an adjacent site, like a lymph node, it's automatically stage three. So you can get bent out of shape about stage three and all the rest of it. And even stage four of this particular type of cancer can be got rid of. I think [actor] Michael Douglas was stage four. I've met so many guys… And the whole sort of… You imagine that this is… The thought of all these guys going down on thousands of multiple sex partners. No. these are ordinary, ordinary guys."

IRON MAIDEN's new album, "The Book Of Souls", will be released on September 4 through BMG in the U.S.A. (Parlophone Records in the rest of world).