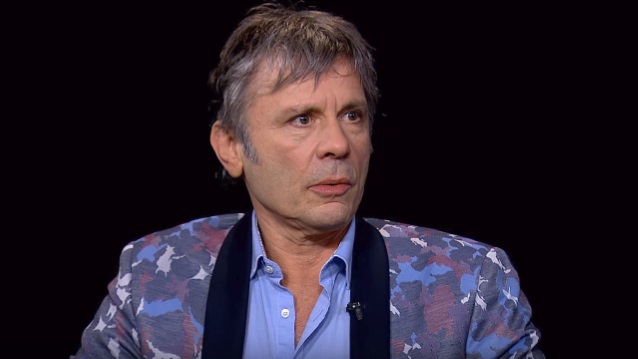 IRON MAIDEN singer Bruce Dickinson was a guest on the November 11 episode of the long-running PBS chat show "Charlie Rose". A clip from the program can be seen below.

Asked for his definition of heavy metal, Dickinson said: "I haven't got one. I've given up. There's no point in even trying to define it. It's defined more by other people than it's defined by me. 'Cause when I started out listening to music, there was no such thing as heavy metal. It was a term coined by a journalist, actually, and I think it was from a William Burroughs novel — but that's a minor detail.

"Metal came out of something that was called heavy rock," he continued. "Heavy rock was simply an offshoot of blues rock — you know, LED ZEPPELIN and DEEP PURPLE and things like that, and FREE, and all those bands. They weren't heavy metal, but they kind of came into the heavy metal orbit, and then the whole world of music became polarized. It became very niche; everybody was put in their little silos. And that was as much a fact of life because of the media, because the media did that. And then record companies figured out that they could market it and yada yada yada and so on and so forth. But we've managed to survive, and not just survive, but to thrive, in a sense, outside that system. So people call us heavy metal, and we say, yeah, fine, we are."

Regarding how IRON MAIDEN has been able to survive and prevail, Dickinson said: "Well, first of all, we don't ally ourselves to the media; we're not part of the cult of celebrity. Hopefully if we end up having any notoriety, it's because we've actually done something, as opposed to having plastic surgery, or whatever — being famous for being famous; turning up to the opening of an envelope. So we do what we say, [and] we do it with integrity. We do a lot of touring. Okay, we do about three months a year, but we tour fairly intensely, and we, I hope, do really good shows. And we engage as much as possible with our audience, which is increasing. 'Cause years ago, in the '80s, we did one show in the New York area, maybe two. We're now doing four, so we're twice that size. And it's a global band. So our niche has grown. I like to say our fans are like plywood — we grow a new laminate of them every generation, and they all stick to each other."

Dickinson is promoting his autobiography, "What Does This Button Do?", which was released in the U.S. on October 31 via Dey Street Books (formerly It Books),an imprint of HarperCollins Publishers.