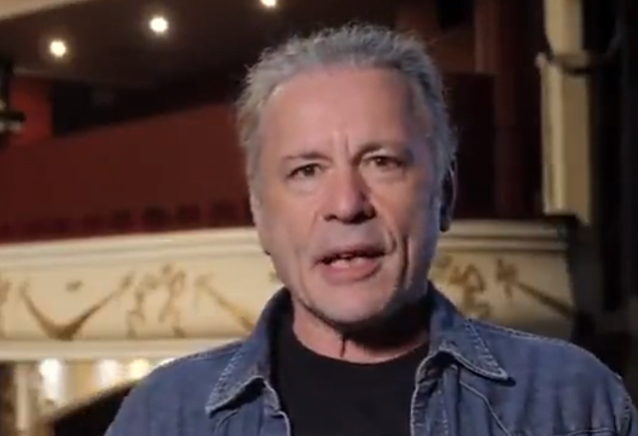 IRON MAIDEN frontman Bruce Dickinson has called on the U.K. government to get its act together to help artists tour the European Union post-Brexit.

As a result of the Brexit agreement, performing artists of all kinds must now have work permits to earn money from gigs in EU countries, and have a "carnet" that allows the transport of goods such as musical instruments across borders. Individual visas and work permits are required for different countries, and U.K. touring vehicles are limited to only three stops in Europe before having to return home. This amounts to extra costs roughly amounting to £5,000 per individual country.

During an appearance on Sky News on Monday (June 28),Dickinson told Kay Burley that Brexit is making it harder for British acts to do tours and concerts in Europe and that the government should be doing more to help.

The 62-year-old singer, who previously admitted he voted to leave the EU, said: "Don't get me started on the government's attitude to the entertainment industry. We are probably one of the U.K.'s major exports. I mean… come on. And yet we're sitting here. We can't do anything.

"It's very well known that I voted for Brexit," he continued. "But, you know, the idea is that after you've done it, you then go in and be sensible about the relationship you have with people. So, at the moment, all this guff about not being able to play in Europe, and the Europeans not being able to play over here and work permits and all the rest of the rubbish — come on! You know, get your act together… Put a decent bloke in who can do something about the relationship with Europe. We can play America easier than we can play Europe at the moment… 'Cause we have a sold-out tour, by the way — hundreds of thousands of people in Europe. So it's just, like, hang on. Export central — what happened to all that stuff? So, let's get it on, government."

Back in 2018, Dickinson told the French news magazine L'Obs that he was "quite relaxed about the idea" of the United Kingdom separating from the European Union, explaining that he thought Brexit would make Britain "more flexible" and that "Brexit actually opens our borders, Brexit opens the United Kingdom to the whole of the world.

"Brexit will not change the status of the [country] by very much," except for "enhanc[ing] our economic capabilities," he added.

After Dickinson's latest comments were aired, people were quick to note his changed position. "This is what he voted for," one person wrote. "Don't get me started on prominent Brexiteers claiming otherwise."

"Own it Bruce, this is what you voted for," added another.

"Well, well, well, if it isn't the consequences of his own actions," tweeted a third person.

"Maybe you should have done some research, this is exactly what you voted for you idiot," said another.

Earlier this month, over 200 musicians and bands — including WOLF ALICE, Annie Lennox, Mark Knopfler, NEW ORDER and RADIOHEAD — urged the U.K. government to act now to mitigate the Brexit-related expenditure and red tape of touring on mainland Europe. The "Let The Music Move" campaign calls for a renegotiation on touring — or "new bilateral agreements with each country that will reduce the costs and red tape" — as well as a short-term "transitional support package” to financially assist artists with new paperwork.

The campaign's organizer, the Featured Artists' Coalition, said that, in 2019, U.K. artists played almost four times as many shows in the EU as they did in North America.

The campaign is asking for the government to cover new and additional costs of touring, deliver measures to overcome restrictions on transporting instruments and stage equipment, and a promise that EU artists will have reciprocal freedoms.

Iron Maiden frontman Bruce Dickinson is frustrated by the impact of #Brexit on UK artists performing abroad, and feels the government can do more to help.#KayBurley UF pic.twitter.com/FHB8tNj9gZ

🎶 Can I play with hindsight? The Brexiteer stared at his begging bowl... 🎶

So, when he supported leave, he was only expecting it to impact other people's lives, not his own?

This seems to be a common theme...

God preserve us. Sounds like he wants the UK and European countries to set up some kind of agreement, to allow free movement of people, good and services, almost as though we might make a Union of European countries, and create a Single Market within it.

The EU are simply honouring his vote.
Or is it that he didn't understand what he was voting for ?🤔

Bruce is a hero to me but he voted for this when the industry he is a part of has been screaming out since 2016 that this would be a disaster. I'm gad he has understood now but it would be more beneficial if he explained that he got it wrong. Would love to get him on @mrjamesob

“It’s well known that I voted for #Brexit but the idea is that after you’ve done it, you go in and be sensible about the relationship..”

Sounds like Bruce Dickinson should now support the @LibDems’ policy for an increasingly close relationship culminating in membership again. 😀 https://t.co/mklcuRvXcy

Bruce Dickinson frontman of iron maiden on Sky with Kay Burley basicaly saying yes i voted for Brexit and ending freedom movement but i didn't mean mine.

Bruce Dickinson (Iron Maiden) 3 years ago in the NME

Funny. Just saw him on SKY railing in disbelief at how things had turned out for bands, theatre tours etc trying to work in Europe.
If only we’d warned him.

Dickinson suggested (in 2018) Europe would be “run a lot better” if musicians were in charge and added that he didn’t see Brexit’s predicted negative impact on touring bands as a realistic concern https://t.co/Xa8450RTEM

Bruce Dickinson 'feels the government can do more to help' UK artists now they are outside the EU.

I feel Bruce Dickinson should have considered the consequences before voting for #Brexit. https://t.co/8oBW6zssxe

Bruce Dickinson here, taking lessons from Roger Daltrey on how to vote for Brexit while also thinking he should be immune from the consequences of that vote. *slow hand clap* https://t.co/fIjZzt7irJ