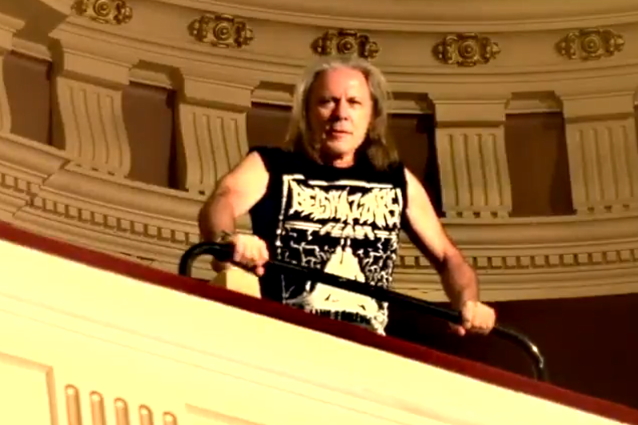 "Belshazzar's Feast" is the story of the writing on the wall in the Bible, and IRON MAIDEN fans have been speculating that the band has been teasing the announcement of its 17th album, possibly to be titled "Writing On The Wall".

In the 34-second video message posted to MAIDEN's social media earlier today, singer Bruce Dickinson can be seen wearing a "Belshazzar's Feast" t-shirt while standing at the top level of a majestic-looking theater and telling the viewers: "July the 15th. Rain or shine, heaven or hell, man or beast, you're invited to Belshazzar's Feast… But your mum can't come."

This is not the first time Dickinson was videotaped wearing the "Belshazzar's Feast" shirt. Late last month, he sported the same tee in a TV interview with Sky News. During the conversation, he teased MAIDEN's future plans, saying, "I can't tell you what it is, but it's right in front of you."

A number of recent MAIDEN-related graphics have featured the slogan "W.O.T.W.," which fans have theorized refer to "Writing On The Wall". In addition, a "Belshazzar’s Feast" poster was spotted at the Download Pilot festival last month bearing the date "15/07" and the letters "IMXVII," which fans believe are a reference to IRON MAIDEN and 17 in Roman numerals.

IRON MAIDEN hasn't released any fresh music since 2015's "The Book Of Souls" LP, which was recorded in late 2014 in Paris, France with longtime producer Kevin "Caveman" Shirley.

If the reports of a new MAIDEN album are true, it will mark the band's sixth to be produced by Shirley, who has worked with MAIDEN for the past two decades.