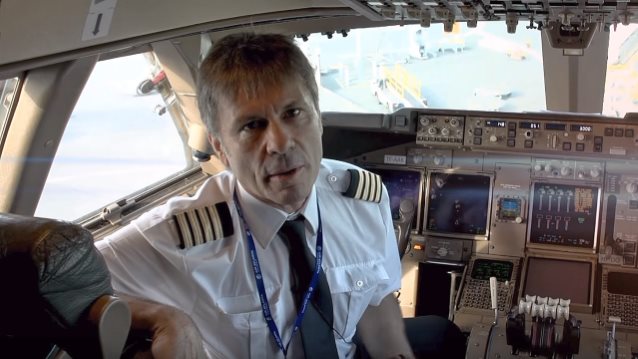 IRON MAIDEN frontman Bruce Dickinson spoke to iNews about being diagnosed with tongue cancer in December 2014. The singer later revealed that the cancer was caused by HPV, the human papilloma virus, which can be contracted through oral sex.

Dickinson wrote about the the subject extensively in his autobiography, "What Does This Button Do?", where he talked about how he overcame the "golf-ball"-sized growth on his tongue and endured radiation therapy that left the energetic frontman sapped of energy.

Bruce told iNews that he wanted to cover the episode in his book to raise awareness of the condition, which affects people who often have no or minimal history of tobacco or alcohol abuse. The individuals with HPV-related oropharyngeal cancer who undergo treatment have a disease-free survival rate of 85 to 90 percent over five years.

"I was trying to be informative, to say this is what it feels like to go through this; but everybody goes through that and I was lucky. I got the all-clear and the treatment left me relatively unscathed," he said.

"But the truth is the treatment itself is hugely damaging to people. I've spoken to a lot of men who had the same cancer and had exactly the same treatment and while all of them thankfully had good outcomes, one or two of them had a horrendous time, far worse than me.

"This is ongoing with men with this particular cancer around the world. There's an epidemic of it, and it's a kind of unspoken thing. Everybody knows about cervical cancer, but nobody really knows about this cancer, which is the same."

"I'm like, really? If your wife or daughter got cervical cancer, you'd go round and tell all your mates that she was a slag, would you?" he said. "It's disgraceful. But because it's men, people think they can get away with it."

While most strains of HPV clear up on their own, the sexually transmitted virus is responsible for an array of cancers.

A study, published earlier in the month in the Annals Of Internal Medicine, found that eleven million men and more than three million women in the United States had oral HPV infections. Among them, seven million men and around one and a half million women had strains that can cause cancers of the throat, tongue and other areas of the head and neck.

According to the Centers For Disease Control, about seventy-nine million Americans are currently infected with HPV and approximately fourteen million people become newly infected each year, making it the most common sexually transmitted infection in the nation.