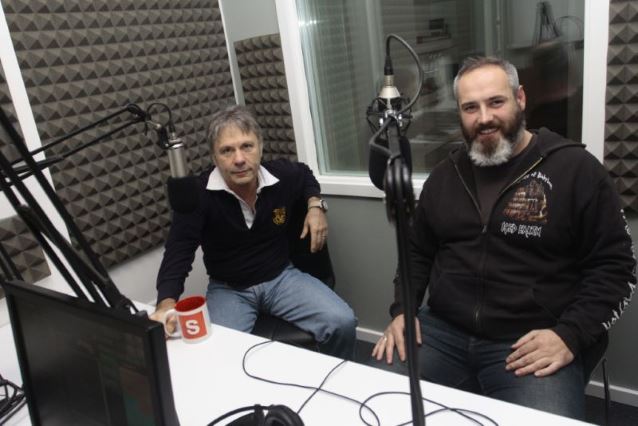 IRON MAIDEN singer Bruce Dickinson just spent a couple of days in Sarajevo, the capital of Bosnia and Herzegovina. It was his second visit to the city after 21 years. The first time he was there, Sarajevo was under siege, cut off from the world, its citizens brutally terrorized by shootings, bombing and starvation, with electricity and water supply being nothing short of a luxury. Bruce and his solo band drove through the frontlines and ultimately played a show for the people trapped in the city. What this gig meant to the people and how it changed Bruce and his band will be told in the documentary film "Scream For Me Sarajevo", which just finished shooting.

Radio Sarajevo show "The Aebyss" had the immense pleasure and honor to welcome Bruce in its studio, where they talked about the upcoming film, his impressions of the city today and, of course, the upcoming IRON MAIDEN tour in support of the band new album, "The Book Of Souls".

The first part of the interview will air as part of tonight's edition of "The Aebyss", with the second part to follow next week.

You can listen to the program online, regardless of your location, at RadioSarajevo.ba.

"The Book Of Souls" was released on September 4 through BMG in the U.S.A. (Parlophone Records in the rest of world).