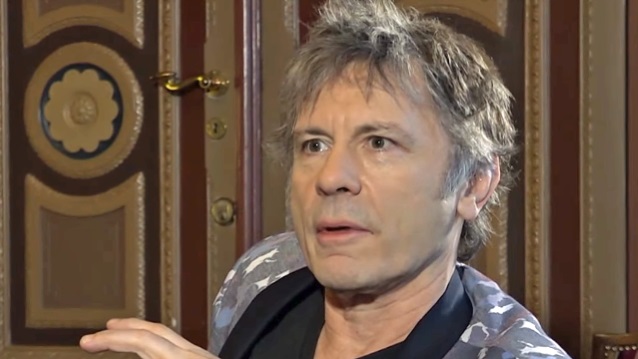 IRON MAIDEN's BRUCE DICKINSON: 'We're Only A Heartbeat Away From Auschwitz'

IRON MAIDEN singer Bruce Dickinson spoke to Newsweek about visiting the Auschwitz-Birkenau Memorial And Museum and memorial in Oświęcim, Poland during the band's 1984 "Powerslave" tour. The museum and memorial, which occupy the site where the Nazis murdered approximately 1.1 million prisoners, preserve Auschwitz's history through powerful exhibitions — display cases fill the blocks that once housed inmates and highlight everything from mounds of hair and shoes taken from gas chamber victims to suitcases seized upon deportees' arrival, according to Smithsonian.com.

"It's a very spooky place," Dickinson said. "The Polish guy who showed us around, he goes there all the time, and I was, like, 'How can anybody do that?' I couldn't be there for more than a couple of hours. It really did my head in. You can smell the evil of the place.

"We think we're all modern 21st-century human beings, but we're only a heartbeat away from Auschwitz, and not just with Jewish people. There's an equivalent going on somewhere in the world, every single day. You think, At what point do we start to evolve? And then something crazy happens, like [the concert massacre in] Las Vegas, and it makes you wonder: What is it with human beings? Are we all capable of doing that?"

Dickinson wrote about his visit to Auschwitz in his recently released autobiography, "What Does This Button Do?" He said: "No birds fly over Auschwitz. It is as if the very soil contaminates the air with the stench of death and the evil of those who walked upon and planned the horror. It is the banality of industrial execution planning contrasted with the screams of the gas chambers that is the true measure of the terror. That terror, I believe, is the secret fear that we may all be such monsters deep down. It makes me shudder even to think it… I cried a lot after the visit. I was angry and silent. Not until I drove into Sarajevo ten years later, during the siege, would I feel the same intensity."

"What Does This Button Do?" last month landed at No. 10 on the New York Times "Hardcover Nonfiction" best sellers list. It was released in the U.S. on October 31 via Dey Street Books (formerly It Books),an imprint of HarperCollins Publishers.