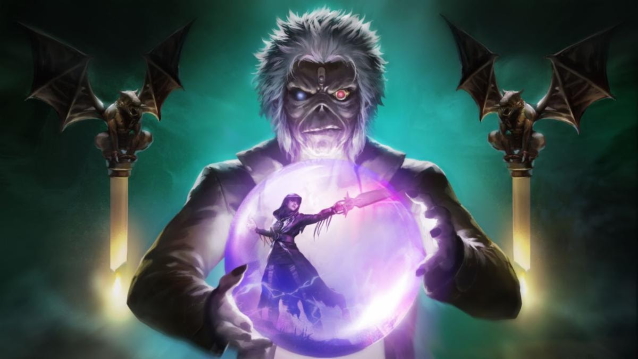 Following the sensational debut band collaboration in April with AMON AMARTH, "Legacy Of The Beast" has now teamed up with another metal band, LACUNA COIL, that has shared festival stages with them on numerous occasions since their formation in 1994, to create a new limited time in-game event and character.

"Legacy Of The Beast" wanted a character that would fit perfectly into a story with Mystic Eddie, a fully-fledged seer that can control his visions (based on MAIDEN's classic track "The Clairvoyant" from their legendary "Seventh Son Of A Seventh Son" album). The result of this collaboration is a dungeon titled "The Search For The Black Anima" and the Shadow Sorceress, a character influenced by LACUNA COIL's interest in the creative force that comes from the "shadow side" and is featured in their 2019 album "Black Anima".

The week-long event will take fans and players on a journey to find a malevolent entity who has become a harbinger of other evil creatures. It's within these forsaken lands that IRON MAIDEN's famous mascot Eddie and his eternal confidant and guide, the wise and ancient Alchemist encounter the Shadow Sorceress, a mysterious wielder of dark arcane power. She has been drawn to the area, with a keen interest in what she calls the "Black Anima". With the help of Eddie and the Alchemist, their goals are seemingly in line as they battle their way through waves of monsters.

Explaining the series of collaborations, MAIDEN manager Rod Smallwood explains: "'Legacy Of The Beast' was built on a foundation of IRON MAIDEN songs, art and history, but has also always been about introducing and developing creative ideas that extended beyond MAIDEN and, just as we've always invited bands out to tour with us, we are delighted to invite some friends to become part of our game and to provide another dimension to the fun, dexterity and excitement of it."

In "Legacy Of The Beast", metal and RPG gaming fans take on the role of the band's iconic mascot, Eddie who travels through time, across a spectacularly diverse array of worlds in captivating 3D environments. Eddie appears in many forms, each a part of IRON MAIDEN's rich history, and each with a set of special powers and abilities.

LACUNA COIL vocalist Andrea Ferro says: "A LACUNA COIL-inspired character will be featured in the IRON MAIDEN video game 'Legacy Of The Beast'… Whaaat? Yeah, I'm that excited about this collaboration! Come on, MAIDEN, man! I remember me and Maki blasting 'Powerslave', 'Seventh Son' and all the other classics as young skateboarding kids getting into playing music. Heavy metal, monsters and video games, that's half my lifestyle right there. Horns up!"

LACUNA COIL singer Cristina Scabbia says: "My first experience with IRON MAIDEN was about 30 years ago, I picked up 'Piece Of Mind' because I was really impressed by the cover. They sounded like nothing I had heard before then and it was instant love. I've always been attracted to video games; they're awesome as they project you into a different dimension and allow you to live a different life, even if for a short moment. I prefer games with a storyline because I like to be embraced by it, get familiar with the characters I am playing with and get involved at the maximum level."

Players can earn the Shadow Sorceress character for free from June 7 until July 5, 2021.

Over the years, the game has expanded to include 20 dungeons and 6 unique Worlds, from the pits of The Beast's Hell, Powerslave's Ancient Egypt, A Matter Of Life And Death's World War II to The Final Frontier of the far future, hundreds of characters including 90 Eddies based on classic MAIDEN album and single covers. A vast array of enemies — corrupt Demons (Lucifer, Baphomet), Gods (Horus, Osiris, Odin) and Monsters aplenty, a bloody Player vs Player Battle Arena and a ruthless Gauntlet feature designed to satisfy new players and hardcore long-term players. The latest feature "Clans" allows players to join forces with their blood brothers to complete team tasks and face off against monstrous Raid Bosses. All to an in-game soundtrack of over 30 IRON MAIDEN tracks, including "The Trooper", "Where Eagles Dare", "Lord Of Light", "Aces High" and more.

"Legacy Of The Beast" is a 4.6-star-rated, action-packed, free-to-play mobile game available on Apple's App Store and Google Play.