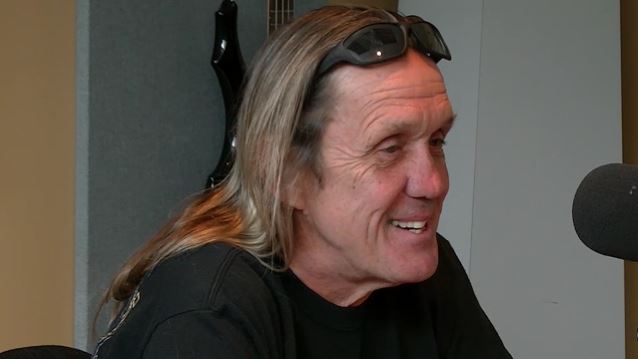 IRON MAIDEN's NICKO MCBRAIN: 'The Book Of Souls' Is 'The Best Album We've Ever Made'

In a brand new interview with Ronan McGreevy of The Irish Times, IRON MAIDEN drummer Nicko McBrain spoke about the making of the band's new album, "The Book Of Souls".

"We talked about doing an album three years ago when we were all at the bar drinking," he said. "We were all looking at each other and we were saying to each other, 'Will we do another record? [2010's] 'The Final Frontier' was a cracker.

"We knew we were going to do another album. It has taken five years since the last one, or has it? The years seem to get shorter as you get older. It's in our DNA. Our fans still support IRON MAIDEN. I suppose, you know, we could go fart in a paper bag and most people would go, 'Cor, that's a bit alright. It's not bad, is it?' [Laughs] But we don't. We go and make these great albums and this is the best one yet."

He continued: "Steve [Harris, IRON MAIDEN bassist] formed the band back in December 1975. Professionally, the first album ['Iron Maiden'] was 1979. That's still an amazing time for making music the way we do.

"This is our 16th studio album. I look it and I go, 'Wow, this is the culmination of everything.' This is early MAIDEN, this is progressive MAIDEN. The end of 'Eternity Should Fail' has all this weird stuff on it. It takes me back to the 1970s to bands that were psychedelic."

Asked if he really believes this is the best IRON MAIDEN album ever — better than even "The Number Of The Beast", for instance — he responded: "I think this is the new millennium 'Number Of The Beast'. That was one of our best albums, and the follow up to that ['Piece Of Mind'] was probably the best of the lot of them. [2000's] 'Brave New World' was phenomenal, I loved 'A Matter Of Life And Death' (2006),but, having said that, this album is the culmination. It has something for everybody. Take 'Speed Of Light', for instance. It is the old MAIDEN. That intro is a testimony to DEEP PURPLE and the title track, 'The Book Of Souls', is fucking immense — if you'll excuse my French — but I think this is the best album we've ever made. It's a fantastic piece of work. There's not one bad song on it."

He added: "I spoke to Steve the other week and I asked what we might do live, and I said to him, 'Why don't we do the freaking lot?' He laughed. Can you imagine IRON MAIDEN playing 'The Book Of Souls'? It would end with 'Empire Of The Clouds' and then it would be 'thank you' and 'good night.' There is no 'Iron Maiden', no 'Run To The Hills' and none of the classics.

"I'm so proud of all the guys. Kevin Shirley [producer] has done an immense job on the best-sounding album we ever had.

"I'm extremely excited. I can't get wait to get out on the road."

Read the entire interview at The Irish Times.