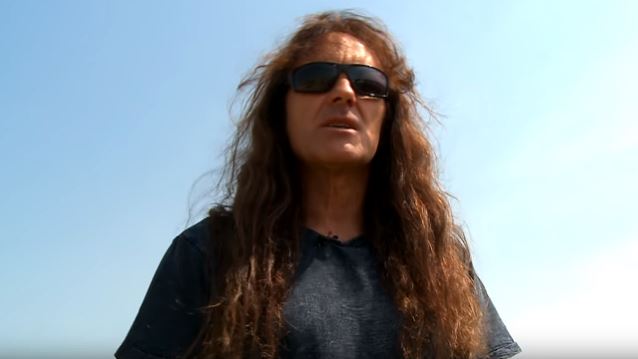 IRON MAIDEN bassist Steve Harris spoke to Seymour Duncan about his role as the band's chief songwriter. Asked what form the songs are in when he presents them to the rest of the band, Harris said: "If you see a credit with just my name on it, that means I write absolutely everything: rhythm guitar parts, guitar melodies, vocal melodies… absolutely everything, really. The only thing I don't write is the guitar solos, but even then I might suggest one or two things."

Steve added that it is liberating as a composer and arranger to have three guitarists in IRON MAIDEN to reproduce the band's songs on stage. "There were things we'd done before where we did layer up the guitars so it meant we could do full melodies, harmonies and rhythms like we'd recorded," he explained. "And it does help when you're writing stuff, because you can bear that in mind as well. But I think the early stuff that we played with two guitars, you don't really miss the other bits too much, but when you add them in, it does make the band sound bigger and better."

Support on the trek is coming from THE RAVEN AGE, the band led by Steve's son George Harris.

"The Book Of Souls" was released worldwide on September 4, 2015 through Parlophone Records (BMG in the U.S.A). The CD was recorded in Paris, France with producer Kevin "Caveman" Shirley in late 2014, with the finishing touches added last year.