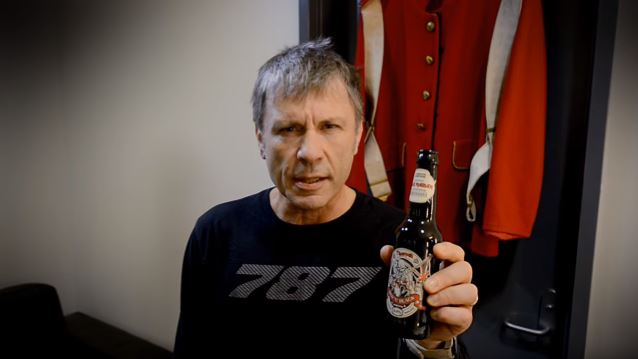 British heavy metal legends IRON MAIDEN are celebrating the third anniversary of their Trooper beer with a video message from MAIDEN vocalist and ale aficionado Bruce Dickinson. Check it out below.

The Trooper beer was launched in May 2013 and has won the BBI (British Bottlers' Institute) Gold Medal 2014, 2015 in their annual blind tasting sessions. The premium British beer is now being exported to more than 50 countries and has proved unusually resilient overseas for a new beer, maintaining its stunning initial export success with repeated high volume orders across some of the world's leading importers.

Dickinson, who describes himself as a "fan of traditional English cask beer," devised the recipe for the Trooper in collaboration with Robinsons, a family-run brewery in the Greater Manchester town of Stockport.

The beer's label borrows the image from the sleeve of IRON MAIDEN's "The Trooper", which came out in June 1983 as the second single from the LP "Piece Of Mind". It features band mascot Eddie as an English soldier, charging grimly with a tattered Union flag in one hand and a bloodied saber in the other.

IRON MAIDEN and Robinsons recently announced Trooper Red 'N' Black — a new limited-edition beer from their award-winning Trooper range — which will be available to fans worldwide from September.

Trooper Red 'N' Black porter is the third beer in the Trooper range following on from the stunning success of Trooper and last year's limited-edition Trooper 666.

The beer, designed once again by Dickinson along with Robinsons' head brewer Martyn Weeks, takes its inspiration from a very early Robinsons recipe which was first brewed in the 1850s, a time when porter style beer was becoming increasingly popular in Britain.

Dickinson explained: "I like tasting outside the box. Stouts and porters were virgin territory for me, so I just went by feel. Martyn and I hope we have created a new take on a classic beer and one which I hope will tickle the taste buds of ale fans in a pleasantly unexpected way." 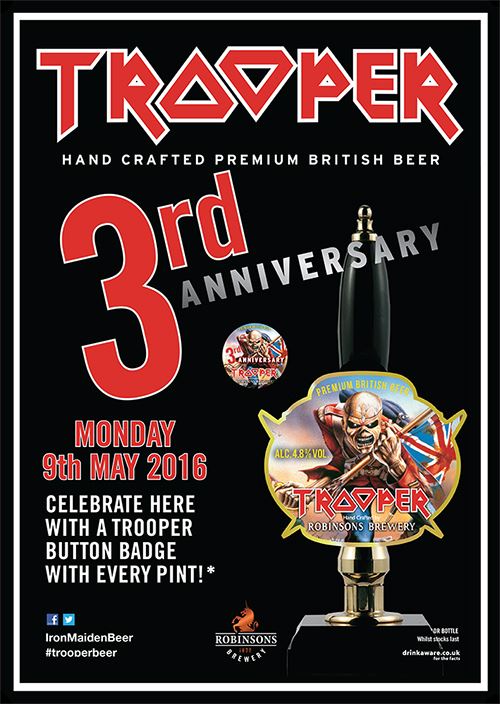