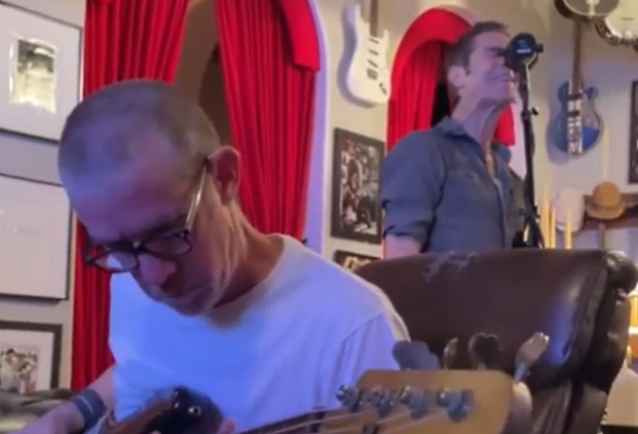 Earlier today (Wednesday, August 17),the JANE'S ADDICTION social media was updated with a short video of Avery apparently working on new music with JANE'S ADDICTION singer Perry Farrell. The clip, in which the actual sound was intentionally replaced by feedback, can be seen below.

Avery initially returned to JANE'S ADDICTION when it reactivated in 2009, but he quit the following year.

Dave Sitek of TV ON THE RADIO played bass on and co-produced "The Great Escape Artist".

Back in 2013, Navarro blasted Avery on his online radio show "Dark Matter", saying that Eric "has constantly talked shit about me, Stephen and Perry, and quit our band twice to quote-unquote pursue all of these really intense solo creative artistic output. All these different mediums that he's going to get into or whatever. Where is it? Where's all the shit that he's doing? I don't know. I wouldn't be so vocal about it if he didn't do a feature-length film talking shit about all three of us."

Navarro added, "He quits JANE'S. He got thrown out of GARBAGE, he got rehired by GARBAGE, he's in [NINE INCH] NAILS, now he's out of NAILS. I mean, what the fuck is the problem here? You know what I mean? Me, Perk and Perry have managed to put everything aside for 30 years."

He concluded: "The guy's entitled to do whatever the fuck he wants to do, and it's fine, but keep your fucking mouth shut. I don't really care. You can quit every band in the world.

"I don't wish him any harm. I have a lot of fond memories with him. But if you're going to fucking open your mouth about the inner workings and dynamics of something that has been very, very good to you for a lot of years, and then not follow through on anything else, you've got it coming."