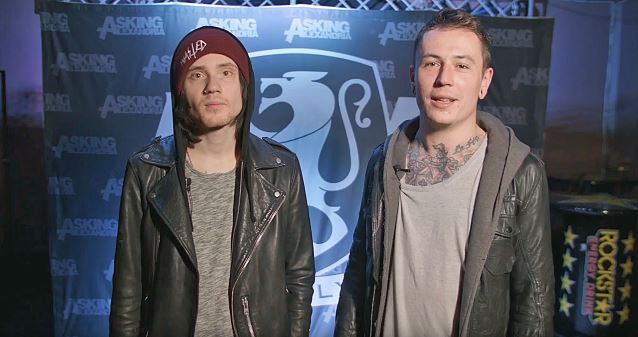 Is It 'Metal Or Not?' Featuring ASKING ALEXANDRIA (Video)

PureGrainAudio recently played a fun game of "Metal Or Not?" with ASKING ALEXANDRIA members Denis Shaforostov (vocals) and James Cassells (drums),who shared some completely comical stories involving shitting in mosh pits, bed wetting and more. Check out the clip below.

ASKING ALEXANDRIA's new album, "The Black", debuted at No. 9 on The Billboard 200, having shifted 30,000 equivalent album units in the week ending March 31. The CD was released on March 25 via Sumerian Records.

In January 2015, ASKING ALEXANDRIA parted ways with singer and founding member Danny Worsnop. On the outside, the future might've seemed uncertain — even grim — to some, but Ben Bruce (lead guitar, vocals),James Cassells (drums),Cameron Liddell (rhythm guitar) and Sam Bettley (bass) dusted themselves off, lifted their chins, and got right back up.

"We hadn't reached our destination yet, and Danny had," admits Bruce. "I think it was necessary. When it happened, I was devastated. I lost my best friend. We even started referring to this part of our career as 'the black period.' It was the darkest time, but we weren't going to give up. If he hadn't left, I don't think we would've been as inspired as we were. I also don't think ASKING ALEXANDRIA would still be around. Instead, we're more excited than ever about this band."

In order to properly do that, the band actually turned to a fan. Ukrainian singer Denis Shaforostov gained notoriety posting ASKING ALEXANDRIA covers on YouTube and consequentially inked a deal with Sumerian in his band DOWN AND DIRTY. Bruce shot him an e-mail one night. The next day, a new ASKING ALEXANDRIA song had vocals and a new era in the band's history took form.