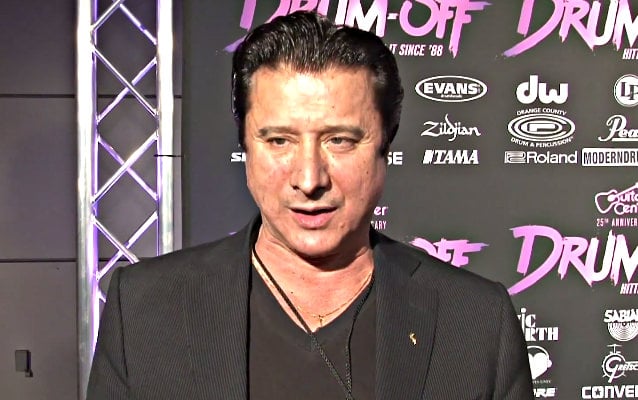 According to The Pulse Of Radio, Steve Perry says that some type of reunion with JOURNEY co-founder Neal Schon is in the works. Fans have been eagerly awaiting some type of answer from Perry after Schon posted an olive branch to him last July on his Facebook page. Schon, who along with keyboardist Jonathan Cain and co-founding bassist Ross Valory, parted ways with Perry in 1998, posted a YouTube link to a Perry radio interview along with a warm open message to his former collaborator, stating: "Great Steve Perry interview. I hope we can reach out to each other and connect once again. We had amazing chemistry together. I love him with all the love and admiration you could even have. Steve, let's talk soon. Neal."

Perry told Artisan News (see video below): "I haven't worked with Neal. We're trying. It's tough. I'm doing my best in that area and I can only do so much… The older I get, the more I do realize how important what we had all together and how it worked. The older I get — like I said — the more I realize we brought that out of each other. I brought things out of them, and they certainly brought a lot of my vocal stuff out of me — just rising each other to this place that you can't get alone. I think that's probably the biggest chemistry thing I recognize now."

Steve Perry, who over the years co-wrote such JOURNEY classics with Neal Schon as "Don't Stop Believin'", "Stone In Love", "Lights" and "Any Way You Want It", told The Pulse Of Radio that during the band's heyday, Neal Schon literally had uncut gems flowing from his fingers.

"It was challenging, because Neal Schon is a goldmine of potential ideas and he doesn't know, really, which are the best or not — 'cause they're all interesting to him," Perry said. "But in come my set of ears and he'd play stuff and I'd hear melodies, I'd say, 'Wait, what was that?!' And (he'd say) 'Oh, I don't know, it's just 'diddle-a doh' over this with a fifth. . .' I'd say, 'I don't care what you call it — what was that?' 'I don't know, it's just an idea I came up with last night.' I'd say, 'Well, why don't you keep playing that for a second while I come up with a melody?'"

Steve Perry left JOURNEY in 1998 rather than be forced into hip surgery so that the band could tour behind their hit reunion album "Trial By Fire". He's currently prepping his first solo album in 20 years.

JOURNEY's latest studio album, "Eclipse", featuring singer Arnel Pineda, was released in May 2011. The Walmart-exclusive CD debuted on The Billboard 200 album chart at No. 13.