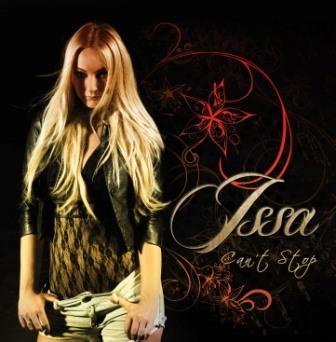 Norwegian singer ISSA (full name: Isabell Oversveen) will release her debut album, "Sign Of Angels", on September 14 in Europe and October 10 in the USA via Frontiers Records.

Helped by producer Ronny Milianowicz (SAINT DEAMON) and killer musicians such as Peter Huss on guitar, Uli Kusch (ex-MASTERPLAN, HELLOWEEN) on drums, Nobby Noberg on bass and Tim Larsson (NICK LACHEY) on keyboards, Issa has managed to create a superb album which offers soaring and instantly likeable hooklines, solid guitar riffs and a crisp sound. Described in a press release as "BROTHER FIRETRIBE meets TREAT with tons of melodies, class and attitude," "Sign of Angels" features songwriting contributions from Joacim Cans (HAMMERFALL),Thomas Vikström (CANDLEMASS, THERION),Daniel Flores (THE MURDER OF MY SWEET),Soren Kronkvist (CRASH THE SYSTEM) and many more.

A video clip for the song "I'm Alive" was shot by Thomas Tjader (PRETTY MAIDS, IN FLAMES) and will be included with the album.

Issa is a 26 years old girl from Oslo. At 17 she started to work her way into the music business as a demo singer for different labels in studios all around Norway. At 19 she won a competition with almost 150,000 votes singing the song "Fade Away" written by Stian Aarstad, who was previously a member of DIMMU BORGIR. The track was released on a record in co-operation with the TV channel Fox Kids.

Issa has performed on many metal and rock records, including albums by GAIA EPICUS and ILLUSION SUITE.