GRETA VAN FLEET, BLACK KEYS and ROBERT PLANT & THE SENSATIONAL SPACE SHIFTERS are among the artists who will perform at Woodstock 50, set to take place August 16-18 in Watkins, Glen, New York — about an hour-and-a-half away from the original Woodstock site.

Among the non-rock acts who are scheduled to perform are headliners like Chance The Rapper, Miley Cyrus, Halsey, Janelle Monáe and Jay-Z.

Tickets for Woodstock 50 will go on sale April 22. Complete information is available on the festival's web site.

The 1,000 acres of greenfield at Watkins Glen International and the surrounding area will make for ample space for attendees to enjoy in revelry and community, and expansive stages primed for one-of-a-kind performances. The festival grounds will also feature lodging experiences for tents, RVs, vans, and more premium camping options.

And in true Woodstock form, a key element of the 50th anniversary festival will be matching music with purpose — specifically sustainability and advocacy. Nonprofit and cause-driven organizations will be a big part of the experience, with programming and activations onsite, including screenings, panels and art installations. Highly curated "neighborhoods" will feature more intimate and unique experiences — with art forms from music to comedy, spoken word to film and amazing food offerings.

The Woodstock 50th anniversary logo was created by award-winning Los Angeles-based artist Kii Arens. Arens's artistic career began when he became Michael Lang's assistant for the 1994 Woodstock Festival. He has created poster and branding work for Coachella, the Hollywood Bowl, and hundreds of musicians across all genres.

The Woodstock 50th anniversary is being produced under license from Woodstock Ventures. Woodstock Ventures was founded by Michael Lang, Joel Rosenman and the late John Roberts. Together, the co-founders along with Artie Kornfeld, produced the historic 1969 Woodstock Festival. Kornfeld will be rejoining the team to celebrate and put together Woodstock 50. 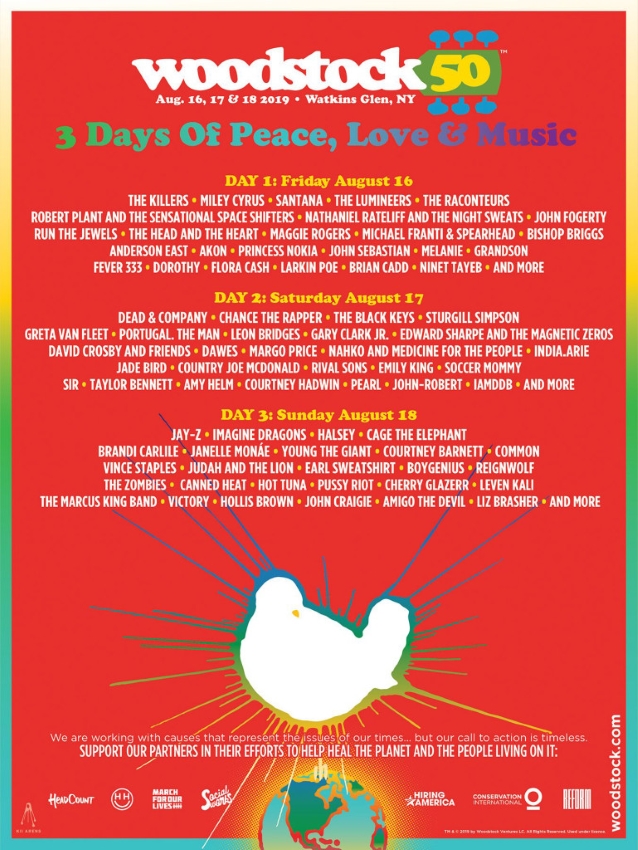