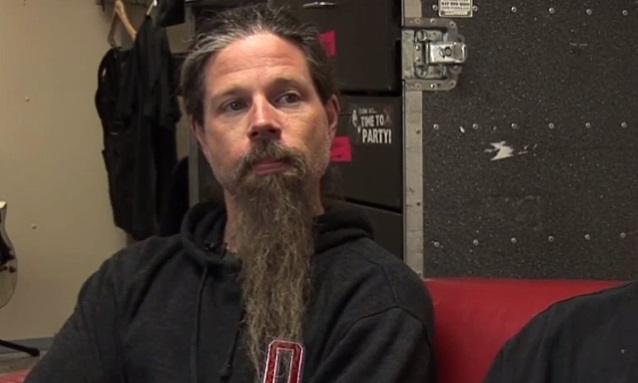 As BLABBERMOUTH.NETexclusively reported as a "rumor" on March 14, it has now been made official that MEGADETH has hired drummer Chris Adler (LAMB OF GOD) to play on the band's new album.

MEGADETH has released the following statement announcing the collaboration:

"Dave Mustaine, the creative driving force behind original American metal and hard rock crossover giants MEGADETH, and Chris Adler, drummer for the leaders of modern American heavy metal LAMB OF GOD, will join original bassist David Ellefson in the creation of MEGADETH's anticipated forthcoming album. Adler will be appearing as a guest on the album and contributing his thundering, hard-hitting, and technically precise style and skill, adding new blood and drive into the mix while staying true to MEGADETH's roots."

Dave Mustaine comments: "Chris is a tremendous talent, and an amazing person. He is going to bring a new level of excitement and energy to MEGADETH that the fans are going to lose their minds over. I have nothing but respect for my previous drummers, but this is going to absolutely KILL!

"Back in 1989, MEGADETH originally worked as a three piece — guitar, bass and drums — when we laid down the framework to our Grammy-nominated platinum album 'Rust In Peace'.

"I want to thank the other members of LAMB OF GOD for allowing this opportunity to take place for all of us in the metal community."

David Ellefson adds: "Chris has been an endearing friend to us in MEGADETH for many years now, and he truly appreciates our music and its legacy. His drumming has forged such an innovative and ferocious path for metal music and I'm very proud that he is anchoring our rhythm section with us on this new album. I can clearly see a new dawn of 'utmost heaviness' unfolding in MEGADETH's next chapter."

Chris Adler offers: "MEGADETH was the game changer for me. Growing up, there was no other band that meant as much to my musical interest and direction. There is no doubt I would not be doing what I have been doing for the past three decades had I not stumbled across 'Killing Is My Business' and the bible of all metal, 'Peace Sells', in my formative years."

He continues: "About 10 years ago, LAMB OF GOD toured with MEGADETH and I was able to share that story with Dave and David, and we have kept in touch ever since.

"When Dave called me a while ago and asked if I was interested in making a thrash metal album with him, I felt like I must've been on a hidden-camera show. I was trying to play it cool, but I was speechless other than YES! Once I called my wife and my band guys to let everyone know, I had some time to really think about it and how I can best fit into this situation.

"I'm coming into this on fire. There is an incredible amount of respect, but the goal here is to make the very best thrash album we can — not just throw names in the CD booklet or be a yes man. Together, I believe we can do something very special!

"Get ready for a very exciting chapter in the MEGADETH legacy."

In a 2006 interview with Xplosive Metal, Adler confirmed that MEGADETH was the band that made him want to start drumming to begin with. He said: "Definitely. For me and my brother [LAMB OF GOD guitarist Willie Adler], that's the band that made us wake up to heavy metal and made us become who we are today. And now to be able to sit down and have lunch with Dave Mustaine and tell him that story and have him talk about what he likes about LAMB OF GOD, it's pretty big for me."

Speaking to Wondering Sound about the influence Dave Lombardo (SLAYER) and Gar Samuelson (MEGADETH) have had on his drumming style, Adler said: "Dave's the guy that made me want to go fast. There's so much power in what he does — both him and Gar Samuelson, who was the original drummer from MEGADETH. I think Gar was a little more jazzy, which I really liked, and I probably spent more time trying to emulate Gar than Dave, but both those guys were the guys who made me want to get faster. Now I realize that's kind of a fickle goal, but [Dave] was obviously one of the innovators, one of the first to do what metal is kind of known for now, with double kicks, and he's still absolutely one of the best."

MEGADETH has yet to announce permanent replacements for drummer Shawn Drover and guitarist Chris Broderick, who quit the group last year.

Drover quit MEGADETH on November 25, 2014 "to pursue [his] own musical interests." His statement can be found at this location. Guitarist Chris Broderick announced his departure from MEGADETH a few hours later, saying that he was exiting the group "due to artistic and musical differences."