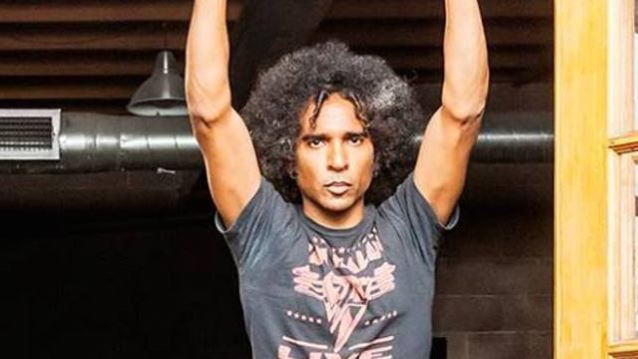 It's 'Too Early' To Talk About New Music From ALICE IN CHAINS, Says WILLIAM DUVALL

ALICE IN CHAINS singer/guitarist William DuVall says that it's "too early" to talk about the band's new music, despite the fact that it's been more than three years since the release of their last studio album.

"The Devil Put Dinosaurs Here" came out in 2013 was the band's second disc with DuVall, who joined in 2006 following the 2002 death of original vocalist Layne Staley.

Asked if ALICE IN CHAINS has been recording any new material, DuVall told Meltdown of the WRIF radio station in Detroit, Michigan on Wednesday (June 22),the day before AIC's show with GUNS N' ROSES in the city: "I don't know. I know we'll be probably talking about that kind of thing over the next few months. It's still early yet. We've gotta get through this tour first."

William also talked about ALICE IN CHAINS' songwriting process and how it has evolved over the years. He said: "We make a habit of kind of starting pretty much with a clean slate every time we've gone in. And that challenges you, so we'll have to see how it manifests this time. But we're not there yet."

ALICE IN CHAINS recently announced the second leg of their North American headlining tour, adding Austin, Las Vegas, Los Angeles, San Antonio and more to a run that begins with five arena shows with GUNS N' ROSES on June 23. The tour includes a second New York City date on July 26 following the immediate sell-out of their July 25 show at the Beacon Theatre.

Speaking about the GUNS N' ROSES-ALICE IN CHAINS pairing, DuVall said: "They call the tour 'Not In This Lifetime' for a reason, right? 'Cause they never thought it would happen. So we were very excited just even hearing that it was gonna happen, let alone getting to join 'em for part of it."

Regarding how ALICE IN CHAINS came to do the GUNS N ROSES shows, William said: "There's a friendship there and a lot of mutual respect over a number of years. We love Duff [McKagan] and Slash, and we were just glad for them that this happened. And, of course, Axl [Rose] is sounding better than ever. So it's just great, man. We're honored to do it. We did the first two gigs back at the T-Mobile Arena in Vegas a couple of months ago, so it was a natural fit that we would join them on the stadium leg as well."

Asked if he got a chance to check out the GUNS N' ROSES gigs in Las Vegas when ALICE IN CHAINS played with the Axl Rose-fronted outfit back in April, DuVall said: "It was really cool getting to do our gig and then getting to kind of fanboy out a little bit. That was a privilege. To still get to be a fan at this stage of the game is one of the most fun things about this whole gig, man. You can watch guys who are kind of your friends, but you also still really admire them as well, and you get to see them do their thing. So, yeah, man, we were standing right there, stage front, and watching them get down, and it was awesome."