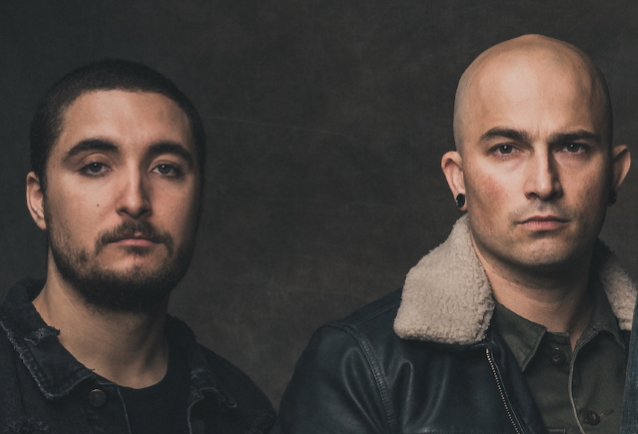 Just one day after TRIVIUM bassist Paolo Gregoletto announced the birth of his first child, the band's drummer Alex Bent revealed that he and his wife welcomed a daughter of their own.

On Wednesday (June 23),Gregoletto took to social media to share a photo of baby Evelina along with the caption: "New baby just dropped last night". Less than 30 hours later, Bent posted a photo of him kissing his newborn daughter, and he included the following message: "I don't have words, I've never felt joy like this before. I love you Naya. Happy birthday."

Guitarist Corey Beaulieu is the only member of TRIVIUM to not have fathered a child. Frontman Matt Heafy and his wife, Ashley, welcomed twins in 2018.

In a 2019 interview with Australia's Wall Of Sound, Matt stated about his parenting approach with his then-one-year-old daughter Mia and son Akira: "[When] we were leaving the hospital, I already had the new ARCHITECTS record ['Holy Hell'] on. They're already listening to heavy music… I'm a full-time band guy, full-time dad, but also full-time streamer [on Twitch]… What I stream primarily is music, so it's me staying in shape for tour and it's just me singing, screaming and playing guitar all day and they hear it and come into the room… I found Akira's been actually copying my vocal-cooldown noises… It's pretty fun."

TRIVIUM's ninth full-length album, "What The Dead Men Say", was released in April 2020 through Roadrunner Records. The LP, which was produced by TRIVIUM and Josh Wilbur, is the follow-up to "The Sin And The Sentence". That effort marked the band's first release with Bent, who joined TRIVIUM in 2016.

As previously reported, TRIVIUM's North American tour with MEGADETH, LAMB OF GOD and IN FLAMES, which was originally slated to take place last year, has been rescheduled for this summer due to the coronavirus pandemic which is sweeping the globe.

I don’t have words, I’ve never felt joy like this before. I love you Naya. Happy birthday. pic.twitter.com/IHqrXYPHTh