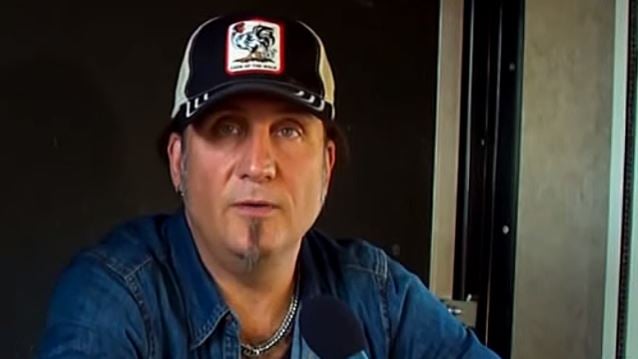 JACKYL singer Jesse James Dupree has spoken out against musical artists who publicize their political views, saying that voicing opinions on such issues is "so totally anti-rock."

During an appearance on "SixX Strings", Jesse spoke about JACKYL's two-and-a-half-decade career and offered his theory as to why the band has stayed together all this time when so many others have fallen by the wayside. He said: "The one thing that I know that we've done is we've stayed honest about who we are and what we do. And I think that's what's attributed to our longevity. We celebrate the fundamentals of rock and roll every single night we hit the stage. And I'll leave it up to Bono [U2] and Bruce Springsteen to write the songs that'll actually cure cancer — at least they think that it does anyway. I mean, I do my share of charity motorcycle rides and we do our charitable stuff, but some of those guys have holier-than-thou opinions of what the hell they do, and they forget that rock and roll was built on two guitars, bass and drums and a beat. So we just stay true to that."

While Dupree acknowledged that "some people can get away with more than others as far as representing a view or an opinion or whatever," he said that he didn't "think the U2 fans really give two shits about Bono's opinion on politics." He explained: "I mean, the last thing I wanna hear is Bono's opinion on the United States presidency. And I won't come to him and tell him what the hell they're doing wrong in Ireland. Fuck him! When is he getting so uppity that he thinks his opinion matters in America about what he's doing? 'Cause he don't know and he don't appreciate… He'll never know and he'll never identify with the fact that what made this country great was its arrogance."

He continued: "The United States used to be an arrogant bunch of sons of bitches and we were the land of the goddamn badasses, and if somebody didn't like it, you could kiss our American ass. And that's why we led the world. But when we started getting indecisive about whether or not we wanted to be badasses and when we started getting a president that would apologize for us every time we turn around. I mean, we've neutered ourselves."

He continued: "At the end of the day, 'Born To Run' is a great song, but it ain't so great that I need to hear what [Bruce Springsteen thinks] about [politics].

"It just makes me sick to my stomach. I just don't care to have the music business be a political forum."

As for his personal political leanings, Dupree says that he has a clear idea of where his allegiance lies.

"This is as far as I'll go with my politics: When it comes time to march down Pennsylvania Avenue and take back over the White House, the people that come to JACKYL shows, that's the side I wanna be on, I can tell you that," he said. "'Cause what I see in front of me is what's left of real America."