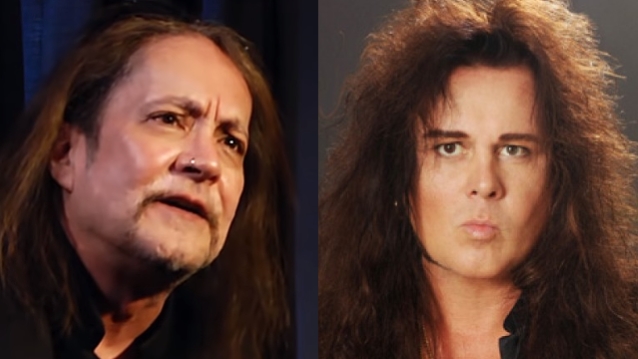 JAKE E. LEE On YNGWIE MALMSTEEN: 'I Never Said He Was A S**t Guitar Player'

Jake E. Lee has clarified his recent comments about Yngwie Malmsteen, insisting that he has never questioned the legendary Swedish axeman's ability as a guitar player.

This past October, Jake made headlines when he said in an interview that Malmsteen is "an arrogant fucking asshole" who is "only really good at one minute aspect of the art of playing guitar."

The former OZZY OSBOURNE guitarist made his comments during an appearance on the "Talk Toomey" podcast, where he was promoting the second album from his RED DRAGON CARTEL project, "Patina".

Asked by "The Eddie Trunk Podcast" to clear up his statement that Yngwie was, in host Eddie Trunk's words, a "shit guitar player," Jakesaid: "I never said he was a shit guitar player… I don't remember how it came up. As you know, doing interviews, you get the same questions over and over… and, for some reason, Yngwie came up. And it was a left turn that I relished, because it wasn't your standard question. And I won't say I regret it — I stand by everything I said. And I never questioned his ability as a guitar player, really. He's a phenomenal guitar player. I question his person, his being.

"Like I said, I kind of wish I never said it, but he's an arrogant asshole," Jake continued. "He is. Everybody in the industry knows it. Nobody really says anything. And I brought it up and I shouldn't have. 'Cause it's a personal opinion and it probably should have stayed personal.

"I love sloppy rock 'n' roll guitar players," he added. "Jimmy Page, Joe Perry, Ace Frehley — yeah, they're a little sloppy, but that's a part of their charm; that speaks to me. It's passionate and it moves me. And then you have your technical players, and they're cool too. And then, occasionally, you have the rare guy that has the fire of a Johnny Winter and the technical proficiency all in one — my ultimate example being Uli Roth. He's amazing. His technical abilities are amazing, and he still plays with such fire and passion. And I put Yngwie in that category.

"I'm not backtracking here," Jake insisted. "I never said he sucked as a guitar player. I don't think his rhythm playing is all that great, but his soloing is… No. There's no question there. He's a phenomenal guitar player."

While reiterating that he never questioned Yngwie's musical proficiency, Jake doubled down on his belief that Malmsteen is "an asshole." He said: "On behalf of all the people that have played with him, that I've spoken to, and all the technicians and crew that I personally know and have heard all these stories about him — that's where I'm coming from.

"And I'll tell you, 'cause my wife Amy, she works as a bartender in a bar. A couple of days after that interview came out, I went to her bar. And there's a lot of people in [Jake's hometown of Las] Vegas that work as technicians — riggers, lighting, sound... I didn't have to buy a drink all night, because they were buying me drinks, because they loved what I said about him. And it's about his person, not about his abilities."

Asked by Trunk if he had any personal experiences with Yngwie that might have shaped his opinion of the Swedish musician, Jake said: "Yeah. It was a very brief encounter. I think it was pretty soon after I had joined Ozzy. I think it was in L.A. He was backstage. There was some band playing at a club, and we were introduced. I mean, it wasn't bad, but he looked at me and said, 'Oh, I saw you play in Sweden,' which was maybe the second show I had played with Ozzy… And the first show was a disaster. I've gone into that in other interviews, where it was not my fault, but I could see where people thought I was the worst guitar player in the world, because of other things that happened for that first show. The second show, I think, was in Sweden, and I was just getting my footing. Anyway, he said he saw the show in Sweden. I said, 'Oh. Well, I hope it didn't piss you off too much. Do you want a refund?' And he looked at me and cocked an eyebrow and said, 'Eh, it's okay...' That's my personal experience with him. It wasn't that bad. But just from all the people that I know that have worked with him… I've heard stories. And I remember reading an interview where he said the reason that he is not considered the giant musical genius that he is is because his music is too sophisticated and it goes over people's heads. Now that right there — right there — gives me pause."

Jake added: "Anyway, I think I've expressed what I think about Yngwie. And, like I said, it's nothing about his guitar playing; it's about his being. And maybe he's a nicer guy now. I don't know… But even then, I kind of wonder whether it's for his image or if it's a true change of heart."

After Trunk said that Yngwie has definitely toned down what many people have perceived to be his openly arrogant and pompous attitude in recent years, Jake offered: "People can change. And I apologize if I've judged him on his past and not his present."