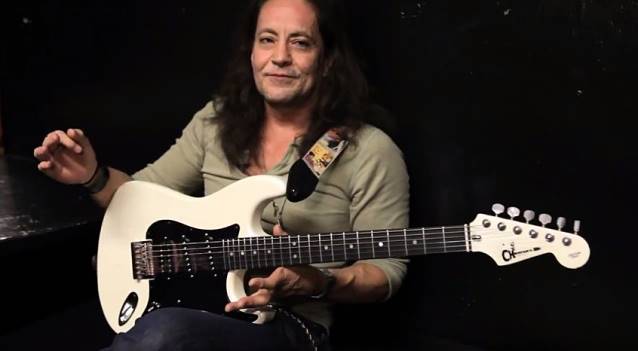 JAKE E. LEE: What Makes Playing Music Exciting For Me

GlideMagazine.com: Tell us what it felt like being back in the studio again recording with a band again.

Jake: Hmm, interesting. Well, I had been recording at home and writing music the whole time I was in retirement, not especially thinking it would ever reach anybody else's ears. But I was fairly happy doing it that way, and with the computer now you can just do everything yourself. And at first that's really cool, 'cause you don't get into arguments. "I want the song this way!" OK. [laughs] There's nobody to argue with. So at first it was really cool, but I admit, after a couple of years, I sort of missed the interaction with other musicians, throwing ideas around, maybe getting a contribution from somebody to a song you thought was perfect and then finding out that, whoa, it's even better now. [laughs] I did start missing that. So when I was approached to possibly do something, it was very noncommittal. I still wasn't exactly sure that I was going to do anything, because I was content — content with my career and didn't feel like I needed to prove anything else. And I'm not a spotlight seeker. I don't particularly like it when I'm the center of attention. So I didn't miss any of that. When I was approached by Kevin Churko and Ron Mancuso to possibly do a project, it was very noncommittal, like, "Dip your toe in the pool, see how it feels; write a couple of songs, see what it's like. You don't have to do anything you don't want." So I decided, yeah, I'll give it a shot and see what happens. And Ron and I, the first song we wrote was "Feeder", and we're listening back to it and Ron's singing on it and Ron's probably the worst singer in the world. [laughs] He is really horrible. [laughs] So we're listening to it and of course realizing he can't be the guy to sing on it, and just off the top of my head, well, "Robin Zander would sound great on this track." Then Ron told me, "Well, I know Tom Petersson. He's a friend of mine. Why don't I call him and see if Robin would do it." I got a little excited and said, "Really? Cool." We sent him the song and he said he'd love to sing on it and he recorded his vocals in Florida, sent the tracks to Vegas. Well, not really like he sent them; he sent them through the Internet. [laughs] Anyway, he sent the tracks back. Ron was in the studio and he mixed his vocals into the song and said, "Come to the studio, you need to hear this." I got there, he played it, and I'm listening to a song where Jeremy from FIVE FINGER [DEATH PUNCH] offered to play drums on it. Tom Petersson played bass on it. Robin Zander is singing on this song that I'd just written. And that's when I realized, I do miss this. It makes me feel so alive and I was so excited. At that moment is when I just said, yeah, OK, I'm pulling my toe back out of the pool and I'm diving in head first. Let's do this. I miss this, I do miss this.

GlideMagazine.com: How did you discover rock and roll?

Jake: I remember the exact moment, 'cause, like I said, I grew up as a child playing classical piano and I was also surrounded by jazz. My dad was a big jazz enthusiast. So these are complex forms of music. The little bits of rock that I heard was always from my younger sister's room and she was into the MONKEES [laughs] and stuff like that and I'd walk by her room and just think, "God, what is this?" I was not a big rock fan at all until I was twelve years old and I'm walking down the hall, passing my sister's room, and I heard the beginning of "Purple Haze" by Jimi Hendrix. And my jaw dropped, like, "Oh my God, what is this?" And I got so excited hearing that song and I turned to my sister and said, "Who is that?" And she goes, "It's Jimi Hendrix. Why? You going to make fun of me again?" [laughs] I said, "No" and she had an acoustic guitar, because she was more of a folky kind of a chick, a hippie chick, and I said, "No, no, not at all. Can I borrow your guitar?' And that's why I started wanting to play guitar, after hearing "Purple Haze" and that turned me into a rock fan.

GlideMagazine.com: What still excites you about playing music?

Jake: The same thing that always has and it goes back to me being selfish. I do it for me. Like I said earlier, I don't particularly like the spotlight, don't like being the center of attention, but I love when you're in a band and you're playing and you can be playing great but then every once in a while, there's just this magic moment where everything comes together and it's hard to explain, you feel like you're master of the universe. It's this elation, this sublime feeling that you get every once in a while when everything is just working right. And that's the reason I do it. That first time I heard "Purple Haze" by Jimi Hendrix. That feeling I got, that's what makes playing music exciting for me. And it's nice to have a crowd that appreciates it. That doesn't suck. [laughs] But I do it for me because looking for that feeling is the best feeling in the world.

Read the entire interview at GlideMagazine.com.