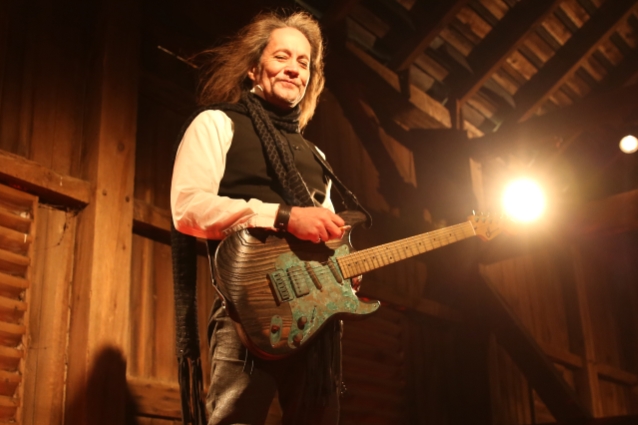 In a brand new interview with NI Rocks, former OZZY OSBOURNE and BADLANDS guitarist Jake E. Lee was asked if he would ever consider collaborating with other artists on various projects, the way that his Frontiers Music Srl labelmates George Lynch and Michael Sweet have done in recent years. He responded: "Hmmm, not really. I'm not that kind of a guy. I live here in [las] Vegas, and Vegas has a whole influx of musicians from my era who have moved to Vegas for whatever reason. It's kind of an old-musicans graveyard now. So I'm constantly being asked — 'cause I know the people; I know the clubs and I go there — if I wanna jam or how about if I do this and get this kind of a band going to make money. I would do something like that if I thought it was musically... if something special would blossom out of it. I would never do it [just] for money. I just feel like doing shit for money is a very ignoble pursuit, and I've always felt that way."

He continued: "George Lynch played here in town recently — well, not recently; it was a couple of years ago. I went to see him, and he said, 'Would you come up and jam with me on stage?' And I said, 'No'. And he said, 'Why not?' And I said, 'Because I don't do that; it makes me uncomfortable. No. I just don't wanna do it.' He said, 'What if I gave you money?' I said, 'That doesn't make any difference.' And I established this for myself a long time ago — either I want to do something, or I don't want to do something, and money will never enter into it if I don't wanna do it. It makes choices a lot easier for me. For example, that night with George, he said, 'I will give you a thousand dollars if you come up and jam one song with me.' And I said, 'No.' He goes, 'It's a thousand dollars! You don't even have to play anything; you just be up there with a guitar.' I said, 'I don't care. I don't wanna do it, and so it doesn't matter what amount.' He said, 'Okay, ten thousand. I'll go to the bank and I'll drag out ten thousand dollars and I will give it to you.' And I said, 'No.' He said, 'What are you, crazy?' I said, 'I'm not crazy. It's just I don't ever base my decisions on how much money is involved.' And I don't. And a lot of people don't believe that. My friends know it's true. But it makes life so much simpler. I don't have to sit there and wonder where the line is. Will I do something if they give me this much money? I think it makes life easier and better — more honest. If I wanna do something, then we can negotiate a price. [Laughs] But if I don't, then I don't care how much money you offer me; I'm not gonna do it. "

Jake added: "It's like people that I know, friends that I know, or people that I've met where... and there's nothing wrong with this; this isn't anti-gay or anything. But where a straight guy said, 'Well, I'm not gay, but for a million dollars, fuck, I'll suck a dick.' They'll say that, and then look at me and say, 'You wouldn't?' And I say, 'No!' I mean, to be honest, I'm not into that. There's nothing wrong with that, and if I was gonna do it, it wouldn't be because of the money; it'd be because I want to. I either wanna do something or I don't. Sucking a dick is not something, today, that I particularly feel like doing. So, it doesn't matter if someone gave me a million dollars, I'm not gonna do it… It's being a whore, basically — if you're doing something [just] for the money. Unless you enjoy it. If you enjoy it and it's something you wanna do and you're making money off it, that's great. If you're doing something only because of the money, then it's whorish, and I try to live my live unwhorishly."

Lee, who was tapped by Ozzy to replace the late Randy Rhoads in Osbourne's band, played on two Ozzy records: "Bark At The Moon" and 1986's "The Ultimate Sin".