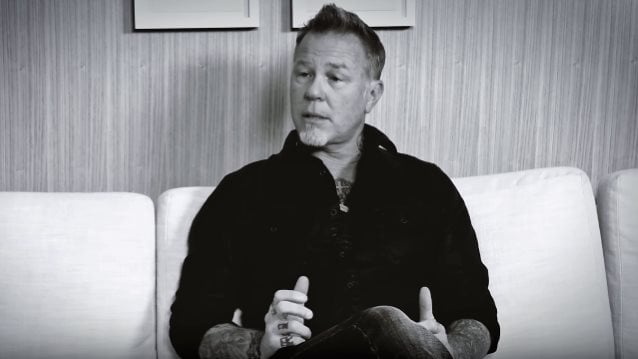 Canada's leading vintage rock authority Jeff Woods conducted an interview with METALLICA frontman James Hetfield on November 30 in Toronto, Ontario, Canada. You can now watch the chat below. A couple of excerpts follow (transcribed by BLABBERMOUTH.NET).

On how his kids view what he does for a living and the songs that he creates:

Hetfield: "Yeah, you know, it's an interesting subject. My kids have grown up in kind of a limelight. We try to protect them where we can. I think it's important that they understand what I do, that it's not just, 'Dad sits around on the couch and plays guitar.' That's what you do for a living and we get to travel the world and all of this. There's hard work that goes into it. So I think it's important that they see that hard work. They see me after the show coughing up a lung or something, or just beat. They see the hard touring schedule as well, so they understand it. But they see the joy that I get out of it, so through that hard work, you get joy out of it as well. As far as songs go, they know the songs, 'cause they're kind of the soundtrack to them growing up. They've traveled around with me all around the world. I think they respect it, they like certain songs. But I'm just dad, I'm just a dork. 'Dad, you embarrass me. What the hell?' And they show me love that way, by telling me, 'Dad, you're being a jerk.' Or, 'Why do you have to do that?' Okay, I get it. And, 'Dad takes up a little too much space.' [laughs] And I love that."

On Lemmy passing away last year:

Hetfield: "Well, Lemmy was one of those guys who I looked up to as a mentor, really, kind of from day one when I was introduced to MOTÖRHEAD. He just looked live a very confident and strong immovable object. And that's what I wanted to be, you know. I needed that, 'cause my life was so crazy and unstable and dysfunctional. I've met him plenty of times. We'd sit down and have a chat over a drink or something. We weren't close friends, but we had a mutual respect for each other. So when he passed, I really was hoping that he knew that we loved and respected him, and that what he did for METALLICA, whether he knows it or not, he was a main reason for why we are where we are today. And when he passed, it felt a little weird. Like, 'The captain of this ship is gone. Who's driving? Who's the godfather of metal now?' But he will always be — always be, for sure."

On what he would credit for METALLICA's continued success:

Hetfield: "Honesty, for sure. Honesty. Whether it's in the 'Some Kind Of Monster' movie or the music or our live show, being honest. At the [intimate] show [in Toronto] last night, the 'One' intro ends, intro to 'One', I go out and I start playing 'Fade To Black'. [Laughs] It's, like, 'What the hell?' And me realizing and getting that wave of shame, like, 'Oh my God! You're an idiot.' And then you're, like, 'All right. Just laugh at it, 'cause it's kind of funny.' And what else are you gonna do? And then start the 'One' song and then later talk about it. So being honest about it is so freeing — being honest with each other, with ourselves. We're 53. What's it look like? What are we gonna do? How long can we tour? How can we stay healthy and happy? So being honest with each other."

As previously reported, METALLICA will play a special intimate show tonight (Thursday, December 15) at the Fonda Theater in Hollywood, California.

All proceeds from the sale of tickets to this show will be donated to Los Angeles Regional Food Bank. Fans are also encouraged to bring canned foods and non-perishable items to the show for donation as well. METALLICA just played a similar show in Toronto, with proceeds also going to a food bank in that city.

METALLICA's latest album, "Hardwired… To Self-Destruct", debuted as expected at No. 1 on The Billboard 200 album chart on November 27, selling 291,000 copies in its first week of release.