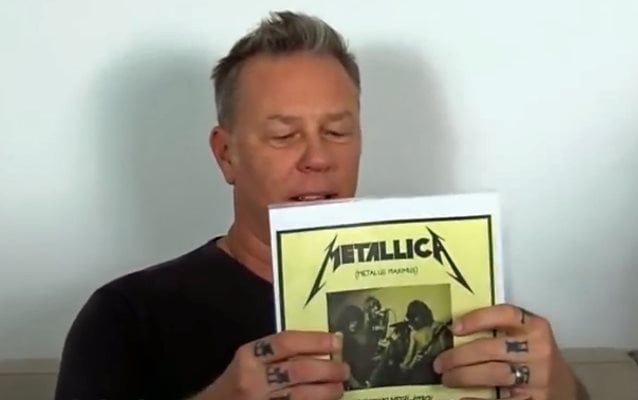 METALLICA frontman James Hetfield visited the offices of the German newspaper Bild in Berlin on November 17 and was asked to comment on various items associated with the band's early years, including the first "Metal Massacre" compilation, METALLICA first concert flyer and a picture of late METALLICA bassist Cliff Burton. Check out the clip below.

Hetfield recently said that the reaction to METALLICA's new album, "Hardwired… To Self-Destruct", has been so positive, it has inspired him and his bandmates to release the next record sooner.

"Hardwired", the quartet's first album in eight years, came out on November 18, and the early response has been mostly positive, with music industry web site Hits Daily Double predicting that the effort will sell between 305,000 and 315,000 copies in the U.S. in its first full week of release.

Speaking to Italy's Linea Rock about METALLICA's plans for the foreseeable future, Hetfield said: "I think we plan… At least for now, we've booked out two years [of touring]… at least. So I can't predict the future, but we start there and hopefully there's more than that. And I would like to make some new music sooner than eight years, for sure. [You get] such a pleasure and a joy of hearing your new music and having other people hear it. So we don't wanna wait that long."

METALLICA revealed last weekend that "Hardwired" is No. 1 in 57 countries, with the album going Top 3 in 75 nations and Top 5 in 105 countries.