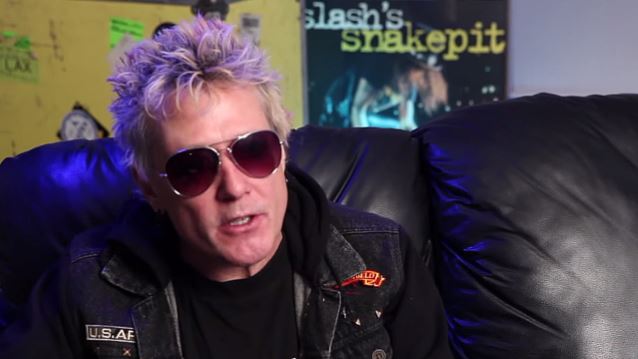 Canadian rock journalist Mitch Lafon of the "One On One With Mitch Lafon" podcast (Facebook page) recently conducted an interview with former KINGDOM COME and current SCORPIONS drummer James Kottak. You can now listen to the chat using the Spreaker widget below.

Asked why the original lineup of KINGDOM COME only managed to record two albums before falling apart in the late '80s, James said: "Well, I hate to say it, but there was somebody in the band who said the wrong thing to the press and created a lot of bad blood. And you can live and die by the press, especially back in the '80s. I mean, I hate to say it, but look what happened to QUIET RIOT. R.I.P. Kevin DuBrow, but, man, his mouth ruined that band; just too much talking and talking. And we had a similar situation where, instead of accepting the compliments — 'Hey, man, you guys sound like LED ZEPPELIN' — it was, like, 'Oh, no. We don't.' And I was the complete opposite. If I was ever asked, 'Who's your favorite drummer?' I'd say, 'John Bonham.' 'Who's your favorite band?' 'LED ZEPPELIN.'"

He continued: "If you're gonna be compared to somebody, be compared to the very best. And that was my whole attitude the whole time. And, unfortunately, the second album came and went, and things happen. It's not always about the music; [there's] a lot of politics involved. And that was it. The manager who got the whole thing together, about halfway through, he kind of lost it and wasn't around anymore, and he was really in charge of everything. So there was a lot of things involved."

Kottak also spoke about the possibility of a reunion of the original KINGDOM COME lineup. He said: "I've been talking to [KINGDOM COME singer] Lenny [Wolf] since 2009 — really talking serious trying to get this KINGDOM COME thing back together, and then it just fizzled. And even when I was, basically… I was asked by Klaus [Meine, SCORPIONS singer], 'Hey, you know, don't do any outside stuff.' Then I said [to the other members of the original KINGDOM COME lineup], 'Okay, guys. Go ahead and go on without me.' And nothing happened. They had gigs on the table. The four of them could have gone and done anything. Just get another drummer. And it just… Nothing happened. So… go figure."

He continued: "I would love to revisit [the early KINGDOM COME material], 'cause I love the first and second album — they're two of my all-time favorite albums. And the songs are incredible. And I think there's an audience out there for it, based on all the other stuff. Heck, if nothing else, we could do the Monsters Of Rock cruise. I mean, we could actually go out and really play a lot. But we'll see."

The original KINGDOM COME lineup recorded and released two albums — 1988's "Kingdom Come" and 1989's "In Your Face" — before all members other than Wolf quit the group.

With a new, mostly German lineup, KINGDOM COME remains active, with several subsequent releases and tours in Europe under their collective belts.

In a March 2011 interview with The Great Southern Brainfart. KINGDOM COME singer Lenny Wolf was asked if he was hurt by the criticism that his band received early on for sounding like LED ZEPPELIN. "I was a young man, a singer who hardly spoke English and our band just exploded," he said. "We were excited and at first the press celebrated us. I remember [U.K.'s] Kerrang! [magazine] said, 'Finally, there's a band like 'the big magic Z!'' and we were all very happy."

He continued: "I must admit that there were some similarities, but in no way did we even get close. Every band, especially young bands, are influenced by somebody and those influences will surface when you start writing your own stuff.

"In the beginning, we took it as a compliment then all of the sudden some press person overheard Danny [Stag, guitar] saying, 'Who's Jimmy Page?' He was saying it out of context like, 'Oh no, not this question again.' so [the magazine] printed that one line: 'KINGDOM COME guitarist announces he's never heard of Jimmy Page.'"

Lenny added: "This is so far out and ridiculous but the way the media works. The press loves victims. They love kicking you when you on the ground and they'll kick you even more. That's just the way it is. We also learned that bad press is better than no press and once I realized that, I just ignored it and I didn't care anymore. Fortunately, the music does all the talking and if the music gives you goosebumps and the music moves you than don't worry about it.

"We took it as a compliment and were excited. We were playing in London the night before Robert Plant was playing and we went down to see him. He was goofing with us, having fun and he was so relaxed. Robert Plant is like above all. He's really above everything. He was joking with us and it was really great. It really made me sad when I noticed Jimmy Page, who was one of my heroes, starting to whine about little KINGDOM COME who was never really a threat at all."