Clint Switzer of the "Music Mania" podcast recently conducted an interview with former SCORPIONS and current KINGDOM COME drummer James Kottak. You can listen to the entire chat below. A few excerpts follow (transcribed by BLABBERMOUTH.NET).

On KINGDOM COME's current reunion tour which features four-fifths of the band's classic lineup, minus lead singer Lenny Wolf, who has been replaced by Keith St. John (formerly of MONTROSE and LYNCH MOB):

James: "It's something I've been wanting to do for years. We actually got to the point in 2013 where we were all here in L.A., but I get a call [from SCORPIONS] saying, 'Hey, we're not saying farewell and we're going to do another album.' I had to pull the plug on it then but we finally made it here until now. I'm super excited, of course."

On whether KINGDOM COME will add future dates once their current tour is complete:

James: "Yeah, we're getting up and running right now. That's the whole object of this and we want to just test the waters, see what's going on out there because, I mean, being away that long, it's the original four of us, me, Danny Stag [guitar], Johnny B. Frank on bass and Rick Steier on guitar. We're going to get together and rehearse and have a good time. We're super excited."

James: "This will sound funny, but having the opportunity to take a break, come home and just recharge, I've never been off. I've been working full-time since I was 15. I'm 55 now and it's been a really wonderful time just to be home. So, I hang out, ride my bike a whole lot, bicycle, you know, just kind of do what I wanted to do for a while. I never had that luxury. We had that here and there with the SCORPIONS, but in the back of your head, you're, like, 'Oh, I have to go back to Europe in two weeks.' It's always in the back of your head. I was jet-lagged for 20 years because we went over there so many times. We went everywhere. I'm so grateful and thankful for all that time with SCORPIONS. They're really cool guys. I just saw them all here at their show in L.A. about a week ago. It's great to reconnect, take some photos and goof off and laugh."

On his dismissal from SCORPIONS in 2016 due to his ongoing problems with alcoholism:

James: "When you see quotes like I was 'dismissed from the band,' it kinda wasn't like that. We talked for months, from April through October or November of 2016 and it just felt like time to get going, and, you know, it worked out. It's worked out for them. They're just really cordial, cool guys and they're my friends. I had the opportunity to go around the world 55,000 times with them. I've been in bands where I wasn't friends with people, and let me tell you, it's no fun. That's the one thing in KINGDOM COME, myself, Danny, Johnny and Rick, we've stayed friends all these years. We talk regularly and as soon as we all four get in a room, we click. That's the only way I can put it."

On whether he has any issue with how often KINGDOM COME has been compared to LED ZEPPELIN:

James: "I said that many times and in the early days and whatever, I'm, like, 'Are you kidding? Thanks for the compliment.' It was the thing during that time and they accused WHITESNAKE of that of sounding like ZEPPELIN and now here we are, 30 years later and we have GRETA VAN FLEET and they're exploding and they're great, but they mentioned in their interviews a couple of times, 'Yeah, I remember reading about [KINGDOM COME].' Apparently, they really love rock and roll, they love classic rock and they knew about KINGDOM COME and the LED ZEPPELIN thing, so they even said in a couple of interviews, 'Wow, we can understand what KINGDOM COME went through.' That's so cool. They're just like me. I was always going, 'Fuck. This is LED ZEPPELIN.' I was told not to say that. I would go 'Why?' We do sound a little bit like ZEPPELIN. And also during that time, we weren't like other bands. We weren't a big hair band. We weren't playing metal. We were kinda doing blues-based rock, it's hard rock, too." 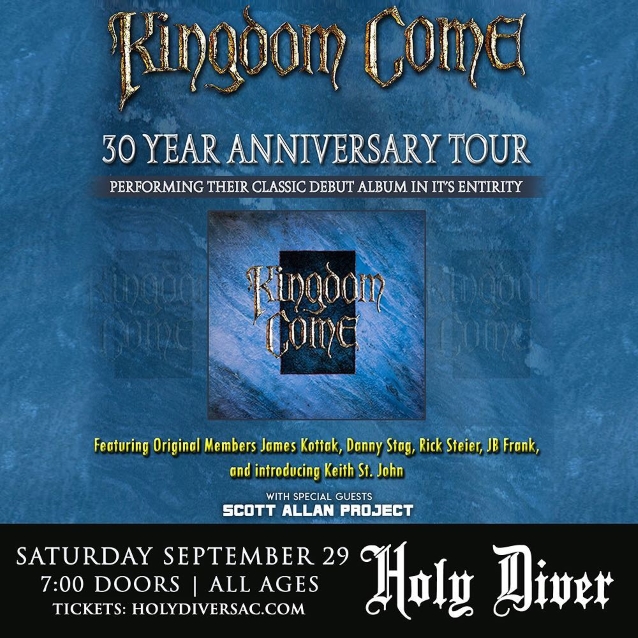