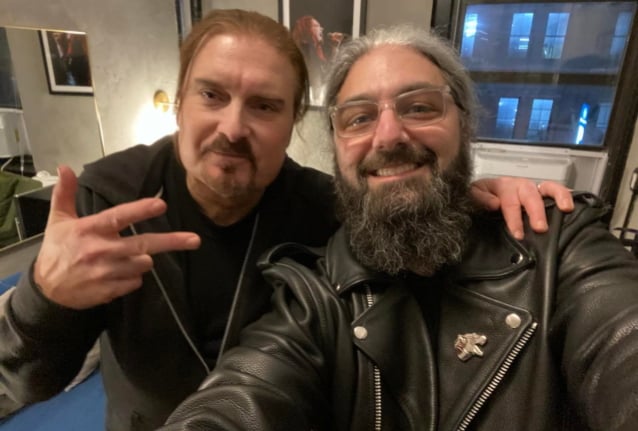 DREAM THEATER singer James LaBrie, who recently said that it was "great" to be back on good terms with the band's original drummer Mike Portnoy, discussed his relationship with his former bandmate in a new interview with Ibagenscast. He said (as transcribed by BLABBERMOUTH.NET): "There comes a point in everyone's lives that you have to really consider what it is that you're… that monkey on your back, and you have to come to terms with it, you have to confront it, and you have to transcend negativity. So if you're carrying around something that just eats away at you, what good is it? And I think for Mike and I to come to terms with all that garbage that went on for years and years, I think it just got to the point that, 'Let's put this behind us. Let's move on to a more positive place and be the better for it.' And I think that's basically what it came down to.

"Mike and I, we stay in touch once in a while by texting, 'Hey, what's up?' and all this stuff, and it's cool," he continued. "And the fact that he's going out with John [Petrucci, DREAM THEATER guitarist] on [John's] solo tour [this fall], they're gonna have a lot of fun. Yeah, the fans are pretty excited about it.

"Life moves on," LaBrie added. "It took a while, and I think if you talk to a lot of people in life, you realize that there have been these contentious moments that it seems to linger for far too long. And fortunately, we were able to come to terms with it and move past it and move beyond it. So it's all good."

Portnoy attended DREAM THEATER's concert on March 4 at Beacon Theatre in New York City. It was the first time he witnessed his former bandmates perform live since his exit from the iconic progressive metal outfit more than 11 years ago.

According to DREAM THEATER fans who attended the show, LaBrie gave Portnoy a shoutout from the stage and Mike waved. Several fans also took pictures of Portnoy at the venue, with Mike and his wife reportedly watching the performance from near the Beacon Theatre soundboard.

This past May, LaBrie was asked in an interview with Loaded Radio if there was any chance of him and Portnoy working together again. He responded: "I think anything is possible. Listen, Mike and I are in a great place. We've been texting back and forth from time to time. I wished him a happy birthday; he wished me a happy birthday… So we're staying in touch.

"Listen, Mike's a great musician," LaBrie continued. "Put it this way… Who knows what the future holds? Maybe there'll be a day and I'll go, 'Holy shit. This track would be perfect to have Mike do this.' Or it might be something that comes from him, from his side. So we'll see. You know what? I'm open. And that's the thing, is that we're in a really good place now. And yeah, it should have happened a long time ago. But human beings, we have a tendency to… our pride gets the best of us."