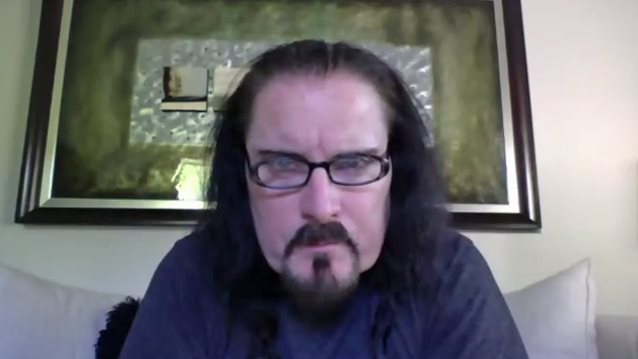 Asked when fans can expect to see DREAM THEATER's follow-up to 2016's "The Astonishing" album, James said: "We're touring the rest of '17 until December. So '18 will be us taking a bit of a break and then later in the year getting back into the studio. So I really don't see a new album coming out until probably late '18, say late fall. And then we'll start another world tour. And I would hope that that would start probably January of '19. At least that's where I see it right now, but it doesn't necessarily mean that's when it's gonna happen."

LaBrie also revealed that he is continuing work on his new solo album for a tentative early 2018 release. He added that if the follow-up to 2013's "Impermanent Resonance" is issued "at the right time," he is "already talking to the guys" in his solo band "about doing a tour behind it." He explained: "I know that we're booked to play September of 2018 at the ProgPower [USA festival] down in Atlanta. We're gonna headline there one of the days; I can't remember the exact date. So we're gonna be doing that. And then what I'm hoping by doing that, we would dates either leading up to it or do dates following the ProgPower festival."

DREAM THEATER last week announced the third and final leg of is "Images, Words & Beyond" tour, which sees the pioneering group celebrating the twenty-fifth anniversary of its milestone RIAA-gold-certified album "Images And Words". The North American headline dates kick off October 25 at Oakland's Fox Theatre. The trek takes the band throughout the US, including dates at NYC's Beacon Theatre and L.A.'s Wiltern, as well as a stop at the Sony Centre in Toronto.

Like previous legs, the show will be presented as an "Evening With Dream Theater," with no opening act. The tour will feature an unparalleled live set of "Images And Words" in its entirety, along with fan favorites from their deep, widely acclaimed catalog.

"Impermanent Resonance" sold around 2,200 copies in the United States in its first week of release to land at position No. 198 on The Billboard 200 chart. The CD also registered the following European first-week chart positions:

"Impermanent Resonance" was released in August 2013 via InsideOut Music. The follow-up to 2010's "Static Impulse" was once again conceived with LaBrie's songwriting partner for over a dozen years, Matt Guillory. Guillory not only took the leading role in composing the material, he also handled all of the keyboards and background vocals.