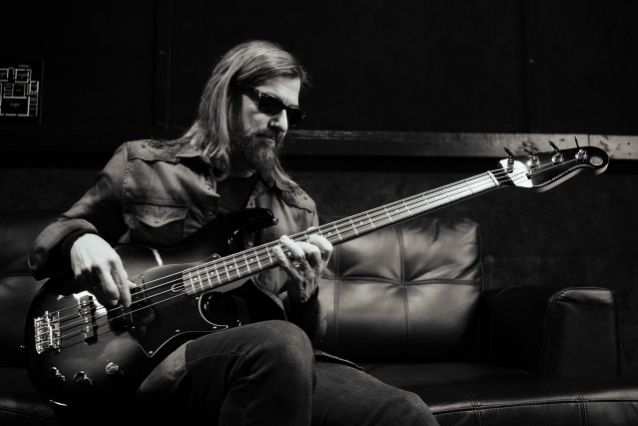 In a recent interview with the "Nothing Shocking" podcast, acclaimed bassist James LoMenzo was asked how he landed the gig with MEGADETH a decade and a half ago. He responded (as transcribed by BLABBERMOUTH.NET): "I just finished playing with BLACK LABEL SOCIETY. And I was kind of — how can I say this delicately? — healing; I was sitting at home healing. So there I was in my backyard. And the cell phone rings, and it's a friend of mine who used to, at the time, work for ESP Guitars as a representative. And he was just a friend of mine, 'cause I met him years earlier; he used to represent one of the other manufacturer companies that I was involved with. And he calls up and he goes, 'J.Lo, you looking for a gig?' And I said, 'Not really. I'm kind of taking a minute here.' And he goes, 'Well, I hope you can turn this down.' And I said, 'All right. What do you got?' And he goes, 'It's one of the big metal bands.' And so I'm sitting there and I go, 'Well, it's not METALLICA, 'cause they just got Robert Trujillo.' 'Well, I can't tell you.' So I was, like, 'You can't tell me? What am I auditioning for? What am I doing?' And he goes, 'Look, just together your heaviest stuff — like, fast, heavy stuff — and send it to me, and I'll send it.' And I said, 'It must be MEGADETH, right?' And he goes, 'I can't tell you.' I said, 'All right, so you want me to get together my heavy stuff and you're gonna send it to Dave Mustaine, right?' He goes, 'Stop.' I didn't have very much. So I gave him a couple of songs I thought were pretty good. And I got a call a couple of days [later], and it wasDave on the phone. And he [said], 'I'd love to get together and meet you. Bring your bass down and we'll listen to you.'

"So I went to go… This was my audition," he recalled. "It was on Sunset Plaza at their manager — at the time, Dave had a manager, and I don't remember his name. He had this little office upstairs. I thought I was going to a rehearsal place, so I brought like a 4x12 Marshall box and a big amplifier and one of my Buzzard basses. Barely any of it fit in the car — all these big things. And a pedalboard and all this stuff that I was just using with BLACK LABEL. And so I get in the elevator and get all this stuff in there, and it's this tiny, little office. So I roll the stuff in and I set up in a corner next to a couch. And the couch, there was just enough room to get it around the coffee table, which was taking up 90 percent of the room. And in walks Dave with Shawn and Glen Drover. And so I meet these guys, and Dave was very gracious, and so were Shawn and Glen, but they were very quiet. I knew they were from Canada, but I'd met other Canadians and they weren't this quiet. I was thrown off balance just a little; I was, like, 'All right, what is this? I've never had to do it like this before?' So Dave starts going, 'Okay, so I listened to all your music.' And I said, 'Great.' I said 'Did you like it?' He goes, 'I listened to all of it.' He goes, 'I think you're a great bass player. So let's sit and talk.' And we talked about a few things. And then he goes, 'All right, let's play some stuff.' And so he didn't take out a guitar. He was just, like, 'All right. Plug your bass in.' And so I started showing him what I knew. And if I tell you, guys, I knew three MEGADETH songs — just what I'd hear in the clubs. Like 'In My Darkest Hour' or 'Peace Sells' or 'Sweating Bullets', that's probably it at that point, because I wasn't listening to a lot of that music. Throughout all that, when that was happening, I was touring all the time, so I just kind of had my collection of CDs, and that was it; I wasn't really reaching out for anything new. So I played 'Peace Sells', and Dave was unimpressed. He goes, 'Yeah, yeah, That's 'Peace Sells'.' And then I played something else, and he goes, 'Yeah, that's that part.' And he goes, 'Just play the kind of stuff that I heard on your CD.' And so I put on a wah-wah pedal just to make it sound more interesting and I just jammed my ass off and just kind of ran up and down, and that was it. And he goes, 'That's great. Okay. Good. We're gonna start rehearsing in a couple of weeks. So we'll send you the setlist,' which I didn't realize was gonna be almost 30 songs, and some of them are five to eight minutes a piece… So that's where I ended up. And that's what basically happened. It was just basically a cold-call audition. And the first gig went great, and the rest of 'em went great after that, two records later."