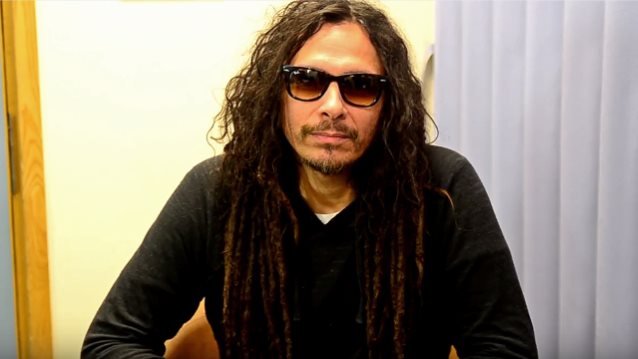 KORN will celebrate the 20th anniversary of its breakthrough third album, 1998's "Follow The Leader", by playing three U.S. shows in late summer. But while it was initially assumed that the band would perform the LP from front to back at those shows, guitarist James "Munky" Shaffer has confirmed that only "most" of the record will be played.

Speaking to KLOS 95.5 DJ Full Metal Jackie, Munky explained: "There's some songs that we did collaborations — we [had guest appearances by] Tre [Trevant Hardson] from THE PHARCYDE, which is a hip-hop group; Ice Cube — everybody knows Ice Cube; and Fred [Durst] from LIMP BIZKIT. So those are the songs that are, like, 'Okay, well, we can't really recreate that.' But we're gonna play a handful of the songs that people haven't heard and maybe we haven't played in 20 years."

The shows are scheduled to take place on September 12 at the Masonic in San Francisco, September 13 at the Palladium in Los Angeles, and September 15 at the Pearl Theater in Las Vegas. These will be KORN's only North American concerts of the year.

Munky told Full Metal Jackie that he looks back fondly on the "Follow The Leader" period of KORN's career. "Because we were really young, and it really was the first bit of money that we started to see from so many years of hard work," he said. "And we just really had a lot of fun. And musically, we kind of experimented with collaborations. We were in a real studio, in North Hollywood, in the middle of town. Because we recorded our first two records with [producer] Ross Robinson up at Indigo Ranch, and that was so remote and removed from anything, and that's how he liked it. But once we had the freedom and the money and the record label support to get into a real studio and have, like, a real beer budget…

"I think, honestly, the making of that album was something like 30 thousand dollars in alcohol by the time it was all done," he continued. "It was fun; that showed you how much fun we had. But, really, it was trying to figure out, 'Okay, we kind of did these two angst records. Let's kind of move into more of a song-based, lightened-mood.' Like, 'Let's have fun a little bit.' That's when we really started to kind of find who we were and make changes as far as song structures and listening to each other play. Like, 'Man, you're really good. I didn't realize it before.'"

Munky went on to say that "Follow The Leader" represented "a really special moment" in KORN's career. "That's when MTV was hitting, and everybody was watching all these boy bands," he said. "And then KORN topping the charts of all the 'TRL' stuff. I feel like it was a turning point. I feel like if you didn't like the whole boy-band thing and the pop thing, you had us over here."

According to Munky, "Follow The Leader"'s influence has reverberated beyond the hard rock world. "It's crazy" he said. "All these young hip-hop kids now are coming up to me, saying, 'Man, I love your band. Because of your band, I'm into this, this and this.' And they're all these young rapper kids with tattoos all over their faces — just super hardcore. So there's a whole new movement. So it's kind of nice for them to step up and give us an homage, I guess."

@fullmetaljackie and @munky_korn taking over the airwaves until midnight. Tune-in now or you’ll probably regret it!