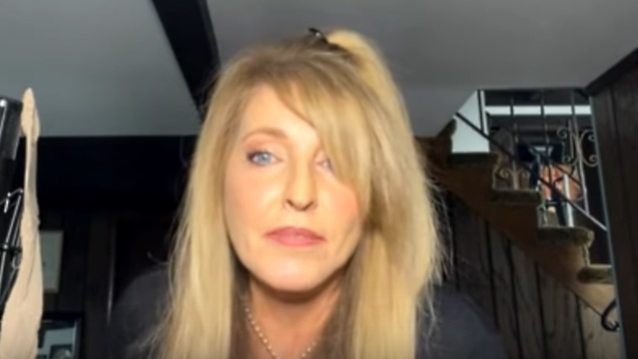 Janet Gardner has opened up to "Waste Some Time With Jason Green" about her departure from VIXEN. The singer, who released her debut self-titled solo album in 2017, broke the news of her exit in a social media post in January 2019.

Elaborating on her reasons for leaving the band, Janet said (as transcribed by BLABBERMOUTH.NET): "There's a lot of personal things — not with them, but in my life. [My husband] Justin [James] and I, between the two of us, we have three kids. Nobody in VIXEN has kids. I can only contribute so much and do everything else that's going on in my life. A lot of people, they're saying right now, 'Well, you can do your solo stuff.' But that's [a collaboration between] Justin and [me] — we live together. We're here together every day, so for us to sneak down in the basement and record a couple of songs, it doesn't take that much time.

"I was very stressed, and there was some conflicts between, you know, if I was playing a [solo] gig somewhere, then VIXEN couldn't play there within a certain amount of time," she explained. "Booking, all kinds of things like that, it all got very stressful, and it got to the point where I couldn't even see straight. I was, like, 'I can't do this anymore. Something has to go.' So I made the decision to do that.

"In hindsight, sure, I miss them, but I don't regret it," Janet added. "It was definitely the right thing to do. My life is good; everything's in balance. I feel good. I'm not stressed."

According to Gardner, it wasn't very hard for her to decide to walk away from VIXEN at this point in her life.

"People were saying, 'Oh, I can't believe she gave all that up,'" she recalled. "It's not like I was giving up a six-figures-a-year pile of cash. It wasn't a huge financial decision to make. It was more of a sad-not-to-be-part-of-that-anymore kind of decision. That's what kept me being a part of it. But it's been much better for my life in general."

Janet went on to say that her split with VIXEN happened amicably and that she harbors no resentment toward her former bandmates.

"There was no reason to get [into] mudslinging or anything," she said. "And I didn't have any desire to fight over the name or anything like that too, so that was a bullet that we all got to dodge. It was just, 'You guys go ahead. I'll go my way, and we'll part as friends. And onward we go.'"

Asked if she thinks there will ever be a reason for her to go back to VIXEN one day, Janet said: "I'm a never-say-never kind of person. I can't imagine that happening, but I don't know… There's all these bands, like, 'We're breaking up and we're never gonna get back together,' and then, two years later, they're back together. So, what's the point? You don't know [what can happen]. 'I would never do that,' and then there you are doing it."

When Janet announced her departure from VIXEN, she said in a statement that it was time for her to step aside and let drummer Roxy Petrucci and bassist Share Ross "pursue their vision for the future of VIXEN."