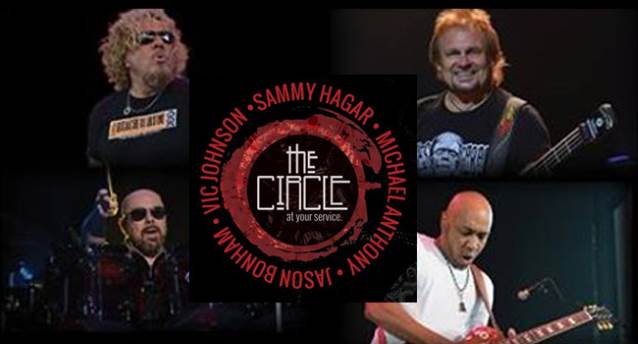 Bonham told Sonic Perspectives in a recent interview (hear audio below) that THE CIRCLE's upcoming disc is a "concept kind of album" that needs to be listened to "in a specific order, which kind of tells the story."

The drummer added that Hagar has "been really inspired as of late, and I think it's gonna be some of his best stuff. It's definitely diverse," he said. "As I said, when you listen to it in the order… It's gonna be an incredible… What he wanted to do was do something very different than he's ever done, which is send you on a journey, like the old days. When you put on an album, you listened to it from start to finish instead of just a song — where the placement of each [song] is vital for it to make sense."

According to Bonham, the final song for THE CIRCLE album was laid down last month. "On Father's Day, I was on tour and I went into the studio, 'cause [Sammy] sent me a new song that he wanted to add to the album," Jason said. "So I went in on Father's Day and recorded drums in upstate New York. But it was great, 'cause I found a great new studio which I'd love to go back to. So it was fun to go do. So I had a day off, did that. And literally I got the mix back from [Sammy] yesterday."

Jason went on to describe Sammy and Michael as "the most positive" and "fun" people to play with. "It's a whole different vibe," he said. "With them, it is what you see — it's a party. Sammy is so up and so positive. And Mikey is such a wonderful guy and smiling. And it's all, like, 'Yeah, it's fun!' It's that fun, life's-too-short-to-be-miserable [attitude]."

He continued: "I'm English, so I can be very 'half empty.' Sammy is always 'half full.' He'll come up to me and go, 'Don't be English around me. 'Cause this is fun. You have got nothing to be worried about.'"

THE CIRCLE released a concert album, "At Your Service", in May 2015. Recorded on tour in 2014, it features live performances of hits from Sammy's four decades of rock (MONTROSE, solo, VAN HALEN, THE WABORITAS, CHICKENFOOT) as well as classic tracks from the LED ZEPPELIN catalog.