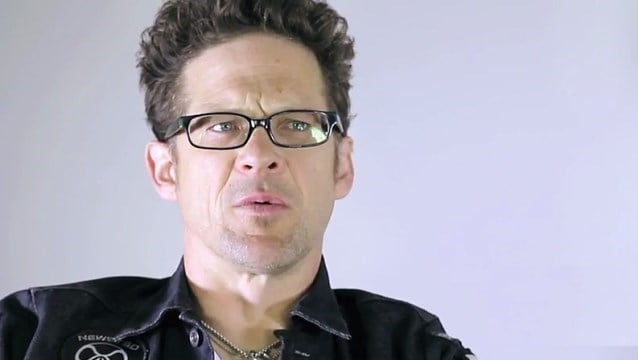 Former METALLICA, VOIVOD and FLOTSAM AND JETSAM bassist and current NEWSTED frontman Jason Newsted took part in a signing and question-an-answer session at The Record Exchange (1105 W. Idaho St.) in Boise, Idaho on Thursday, September 26. Fans got a chance to ask Newsted questions about his legendary career during a question-and-answer session moderated by 100.3 FM The X's Big J. Newsted then signed a CD or vinyl LP copy of NEWSTED's debut album, "Heavy Metal Music", and one other item of the fans' choice. Fan-filmed video footage of the event can be seen below.

NEWSTED recently filmed a video for the song "King Of The Underdogs" in Oakland, California. Directing the clip once again was Leon Melas, who previously helmed NEWSTED's video for the track "Soldierhead".

In an interview with Revolver magazine, Newsted stated about the lyrical inspiration for "King Of The Underdogs": "'King Of The Underdogs' is kind of a personal thing almost. It's, like, the highest rated of the underrated. I think people are rooting for me to win as they do with underdogs."

"King Of The Underdogs" is featured on "Heavy Metal Music", which sold nearly 8,000 copies in the United States in its first week of release to land at position No. 40 on The Billboard 200 chart. The CD was made available on August 6 in North America via Chophouse Records/Collective Sounds and August 5 in Europe through Spinefarm Records.