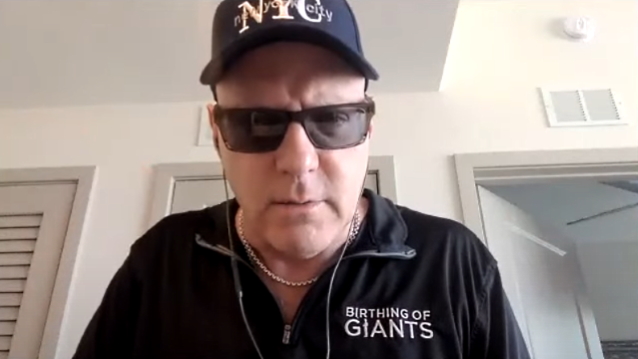 TWISTED SISTER guitarist Jay Jay French spoke to Brazil's Wikimetal about the fact that in today's day and age when anyone and everyone floods the musical market, it becomes increasingly hard for one band, artist or songwriter to stand out in the flow to be heard and earn a living by making music.

"First of all, the good news is anybody can make a record," he said (as transcribed by BLABBERMOUTH.NET). "But the bad news is anybody can make a record. And so there's so much out there that how do you rise above the noise? That becomes the issue. Now, we happen to have two songs — 'We're Not Gonna Take It' and 'I Wanna Rock' — that have raised above the noise to the point where they are standard bearers in the world of popular music, in much the same way that JOURNEY's 'Don't Stop Believin'' is just a standard bearer. Whether you like them or not, that's not the point — it's a standard-bearer song. QUEEN'We Will Rock You', 'We Are The Champions', these are standard bearers — these are massive hits that people sing in stadiums.

"Very much the mentality of Europe and South America as it pertains to stadium-sounding anthems is one of the reasons why TWISTED SISTER is successful today," he continued. "Even though our music is played in American football stadiums and baseball stadiums, it is almost tailor made for South America and Europe, because in South America and Europe, at soccer games, everyone puts their arms around each other and they sing these songs. So this is one of the ways that our songs become standards. But also we license them for movies and commercials and soundtracks.

"In the '60s, counter-culture groups were offended by corporations: 'We'll never give our music to Chevrolet. We'll never give our music to Ford. We're never gonna do that, because that's beneath us. We're not part of the corporate stuff.' Well, nowadays, I'm saying, what we're saying, [is] anything we can do to get our music out there is important — any avenue," French added. "It just so happens licensing music is the last bastion of real money in the music industry, because it's old-time money. The way they pay you is just the way they've been paying you for the last 30, 40, 50 years. It's not like streaming or anything else — you get real money. So the benefit of it is twofold — one is you get paid a lot; and the other side of it is you get broadcast a lot.

"We're Not Gonna Take It" was written solely by singer Dee Snider. As influences for the song, he previously cited the glam rock band SLADE, the punk band SEX PISTOLS, and the Christmas carol "O Come, All Ye Faithful".