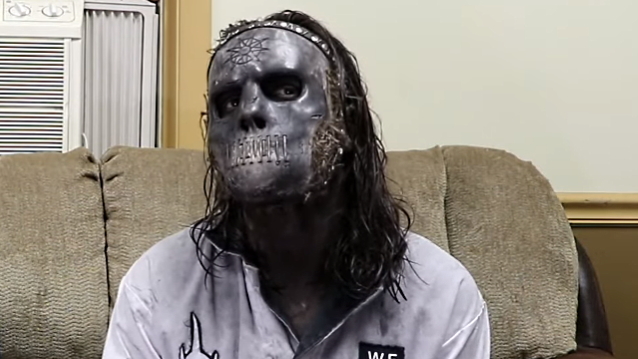 JAY WEINBERG: 'I Wanna Be With SLIPKNOT As Long As I Possibly Can'

In a brand new interview with Sick Drummer Magazine, SLIPKNOT drummer Jay Weinberg spoke about the physical demands of playing in such a high-energy band. He said (see video below): "Touring is hard, but it's hard like anything hard. Anything that you commit yourself to entirely, a hundred percent, every night of every week of every month of the year, that becomes difficult. But at the same time, we're really fortunate to have the opportunity that this band has grown to a certain size that's completely larger than itself. And I'm blessed to have the opportunity to play with this band. It's something I don't take for granted; it's something that I commit myself to every night."

He continued: "And as far as the toll it takes? That happens, but I feel good. I think the music keeps us all very… it gets us day to day. The only reason we're here is for the music, and for the fans — and for us. This is where we get to tap into what we love to do the most, and we love sharing it with the people who've been so passionate about this band for 20 years. So all that coming together makes it easy to get from day to day. As difficult as every day is, that makes it really easy."

Asked if he is planning to do SLIPKNOT as a "long-term endeavor," Weinberg said: "Yeah, I wanna be with SLIPKNOT as long as I possibly can. These are the best musicians in the world. I've had the best time creating with the guys. Now having done two records together, I can't wait to see what the future holds. So, of course, I really wanna push this into the future, for sure."

Weinberg, 28, discovered SLIPKNOT when he was a pre-teen, through his father Max, of Bruce Springsteen's E STREET BAND, and leader of the house band on Conan O'Brien's talk show. He was hooked immediately and was a huge fan of SLIPKNOT by the time he was invited to Los Angeles to try out as replacement for Joey Jordison in 2013.