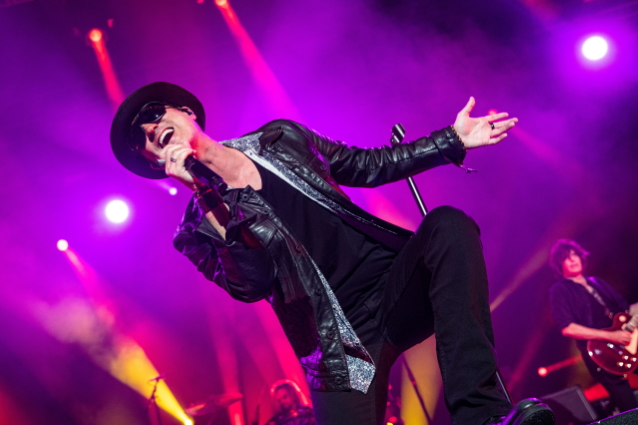 JEFF GUTT On His First Four Years As A Member Of STONE TEMPLE PILOTS: 'We Kind Of Became Like A Family'

In a new interview with Meltdown of Detroit's WRIF radio station, singer Jeff Gutt spoke about his experience of fronting STONE TEMPLE PILOTS for the past four years. He said (as transcribed by BLABBERMOUTH.NET): "It took a long time for me to get in there and for them to ask me to be their singer. So it was a long time of getting to know each other and getting to trust each other. We kind of became like a family and spending all the time that we have — 'cause we did a lot of touring before the whole COVID thing. We went around the world together. When you do that with people and you write records and you share intimate writing times with people, it's a good connection to have. And these guys, their musical vocabulary is ridiculous, so it takes a lot off my plate. Whereas before I would try to micromanage everything I had going on around me, but now everything's pretty much handled. I just have to come in and just listen to the music. And when they're writing it, it's pretty much spot-on."

Asked if STONE TEMPLE PILOTS have been working on new music during the pandemic, Gutt said: "I haven't had enough time with the guys to hear all their ideas. But I'm always writing, and I know they're always writing. And they always come in with a million things. So I'm excited for when that happens, 'cause it's gonna be like the floodgates opening and it'll be a real creative time. Right now it's more of a time just to get our bearings together after having all that time off, and just remembering how to do it. [Laughs] And just getting out there and trying to enjoy playing in front of crowds — not that it's hard to enjoy it, but it was taken away, so to have it back is all we wanna do right now. Speaking for myself, of course, I just wanna get out there and get in front of people and play these songs that I love."

Gutt, a 45-year-old Michigan native who spent time in the early-2000s nu-metal act DRY CELL, among other bands, and was a contestant on "The X Factor", joined STONE TEMPLE PILOTS after beating out roughly 15,000 hopefuls during an extended search that began more than a year earlier.