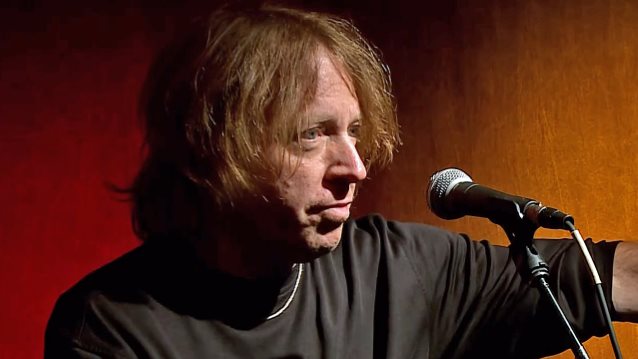 Jeff Pilson spoke to the "Music Mania" podcast about last year's reunion of DOKKEN's classic lineup, which played its only U.S. show in September in Sioux Falls, South Dakota before embarking on a six-show Japanese run dubbed "Unleashed In The East".

"I enjoyed it quite a bit personally," the current FOREIGNER bassist said. "And because of DOKKEN's history, I wasn't necessarily expecting to enjoy it personally as much as I did. But we ended up getting along great. We went out there and did the shows, and the audience reaction kind of made it all worthwhile right there. And the cool thing is we've got a live DVD and CD coming out, and we managed to write a new song, which we recorded in the studio that is going to be part of the package of the new live DVD. And it came out amazing. Plus we did two acoustic remakes of a couple of the old DOKKEN songs that came out really amazing. So I'm pretty excited at the whole package in general; it came out just amazing. And I've been approving mixes out here on the road the last few weeks, so I think we'll be seeing that by the end of the year. And it really came out great. I'm very, very excited."

Asked about the possibility of more U.S. shows featuring DOKKEN's classic lineup, Pilson said: "You know, I would never say never, because… It's a good thing I didn't say 'never' before, because… [Laughs] I wouldn't rule it out. The thing that's tricky is our schedules are very hard to get together. The reason it worked out with that particular reunion is the Japanese were very, very helpful in helping organize it. They actually got a copy of the FOREIGNER tour schedule and booked around that, which made it impossible to say no. They really went the extra mile for us. But behind something like that, it's very, very hard to schedule time for something like that. But we'll see. I hope it happens. And I really enjoyed working with the guys again. And like I said, when you hear how strong the new song is, you're gonna be shocked that we ever took a break. So it's pretty cool, man."

DOKKEN's upcoming concert DVD will reportedly feature footage from two of the Japanese shows — including Tokyo — as well as the band's Sioux Falls gig.

Don told "The Classic Metal Show" that the main reason he doesn't want to continue with the classic DOKKEN lineup is that he "loves" the band he has now — which features Brown, alongside guitarist Jon Levin and bassist Chris McCarvil.