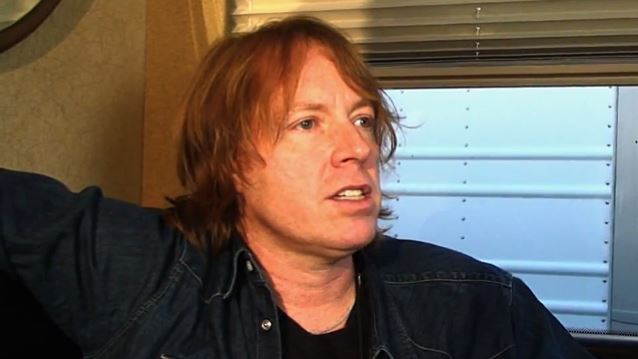 On the original breakup of the classic DOKKEN lineup:

Jeff: "What happened was… we recorded… We had a meeting after the last show of the 'Monsters Of Rock' tour with VAN HALEN and SCORPIONS and METALLICA. And that night we had a meeting in Denver and all the big… It was one of those things where the managers and accountants flew up from New York and the label came in from L.A. — one of those kinds of deals. And we met in this big conference room and we talked about breaking up. And, basically, the record company was trying to talk us out of breaking up; that was the reason everybody came there. And Don [Dokken] just insisted, 'No, I want it to go.' So they offered us a bunch of money for [the DOKKEN live album] 'Beast From The East'. And… I don't remember exactly how it was left, but I remember thinking, 'Okay, we're broken up.' I came back off the road and kind of started to make plans for that. Then Don and I had to go in and finish 'Beast From The East' and we recorded [the new DOKKEN song] 'Walk Away' [which was included on 'Beast From The East'], the music… I guess we all recorded the music… not at the same time, of course. But Don and I did the vocals and everything, I remember… I think I was in the state of mind, like, 'Okay, we're broken up.' But I don't think the reality had hit me yet."

On the change in DOKKEN's sound on the 1997 album "Shadowlife":

Jeff: "Well, the change in sound was due to the fact that the world had changed so much and it was us trying to adapt. Plain and simple, [it was] us trying to have a different approach… more modern or whatever. We had been listening to a lot of TOOL records at that point. Plus the producer, Kelly Gray, was very much from the whole Seattle world — not into the melodic rock world, really. Which kind of makes him an odd choice for DOKKEN [laughs], when you think about it. Once again, we were falling apart. Half the band [was] out in Phoenix, and I know Don was unhappy during a lot of it. So it was just too spread out… It wasn't working well. So how I look back on that record is that there were some nice moments, but overall [it was] just not an inspired piece of work. There's a couple of really wonderful things on there, but overall, not an inspired or a cohesive piece of work."

Jeff: "Lots of things, but, basically, to make a long story short, the people at Warner Bros., when we did 'Rock Star' [Editor's note: Pilson appeared as the bassist for fictional band STEEL DRAGON in the movie 'Rock Star'], they came to me and they said, 'You know what?! We are willing to put in a massive campaign for a DOKKEN record, but it has to be delivered in this window.' And I went to Don with this and I told him, 'Don, look, we have an opportunity to get more publicity and more support on a record than we've had in 20 years, but we have to deliver [it by] an X date or whatever.' And he could not accept that and he refused to do it, and I got just insanely despondent about that. So when the time came, I left. To me, that was the final insult. I just couldn't understand that thinking at all… I just felt that that was too big an opportunity to pass up. And my feeling was he was partly passing on it because it wasn't something he had to do with, where he had any say in or control of, and I just thought that that was a rotten reason for not doing it."