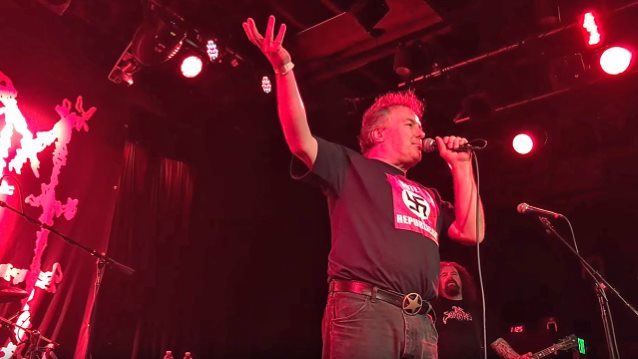 Legendary DEAD KENNEDYS frontman Jello Biafra joined NAPALM DEATH on stage on May 6 at the Slim's in San Francisco, California to sing the DEAD KENNEDYS classic "Nazi Punks Fuck Off". Video footage of his appearance can be seen below.

Biafra, who has performed the track with NAPALM DEATH several times in the past, explained to the audience that the song's message has taken on a new meaning during the 2016 presidential election cycle. He said: "Nowadays this song is about the Tea Party, modern kinds of white supremacists who leave the white hood in the top drawer and think a four-hundred-fifty-grand-a-year combover will paper over the fact that a fucking racist is still a fucking racist fucking asshole. So nowadays… And the only way to stop this guy… If you know anybody that says, 'Yeah, I kind of like Trump,' talk to 'em. Don't argue — communicate as to why… It's Trump as much as Trump-ism and making racism cool again that's the problem. Right when black lives matter, this super-rich egomaniac says that brown lives don't matter? I'm sorry. Nazi Trump, fuck off!"

In a recent episode of his "What Would Jello Do?" video series, Biafra stated about the controversial Republican presidential candidate: "Donald Trump is serious racist. Just ask his buddy David Duke or all those neo-Nazi organizations coming out of the woodwork, doing robocalls in different states, telling [people] to support Trump. One of the main Ku Klux Klan people publicly endorsed him. Trump did not repudiate this at all."

Biafra first gained attention as the lead singer and songwriter for San Francisco punk rock band DEAD KENNEDYS. After his time with the band concluded, he took over the influential independent record label Alternative Tentacles, which he had co-founded in 1979 with DEAD KENNEDYS bandmate East Bay Ray. Although now focused primarily on spoken word, he has continued as a musician in numerous collaborations.