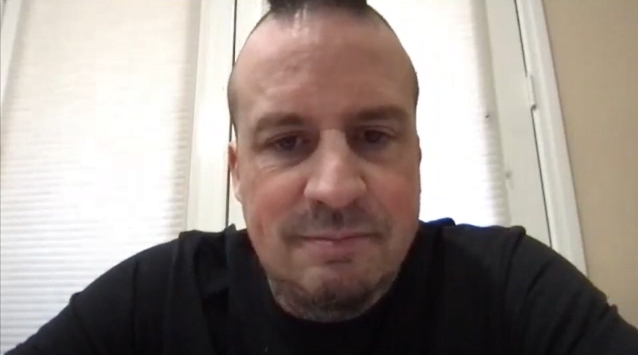 Former FIVE FINGER DEATH PUNCH drummer Jeremy Spencer has revealed that the band's onstage meltdown in Memphis nearly six years ago "sucked the life out of" him.

According to multiple reports at the time, FIVE FINGER DEATH PUNCH performed half a dozen songs on May 1, 2015 at the Beale Street Music Festival before the entire band, except Ivan Moody, walked off stage, leaving the singer seemingly confused and talking to fans in rambling fashion.

Spencer discussed the incident in an interview with Dr. Music while promoting "Devil From Hell", the latest single from his PSYCHOSEXUAL project. Jeremy said (as transcribed by BLABBERMOUTH.NET): "That night probably was the changing point for the band. That popped my bubble, for sure. I never thought that something like that would go down on stage, and I don't think the stage is any place for that kind of stuff to take place. But, unfortunately, alcohol took over, and it did. And I had reached my breaking point, and then I let it be known and kind of stormed off the stage and left everyone hanging up there for a long time and tried to make it as uncomfortable for them as I possibly could because I was making a fucking point. And the tour manager basically begged me to come back and finish the show. And he said, 'I'll book your flight home if you wanna bail after this, but please…' And I was, like, 'Okay. People did pay money. Let's go do the right thing.' And then we went up there and it still fucking sucked. It was an awful show, and the crowd, unfortunately, suffered because of one person's bad decision making. And it's well documented — you can see it on YouTube. The story is well known. It's not like I'm making up bad shit about someone. It's factual. So it sucked — it fucking sucked the life out of me. I don't know how else to describe it other than it was extremely unpleasant. [Laughs]"

Asked if there was any tension between him and Ivan after the show or if he ended up taking the next flight home, Jeremy said: "I stuck around. We weren't really in the same dressing room or hanging out. I would see him right before we went on stage. So nothing really changed. Until he wasn't drinking, nothing was gonna change. You can't reason with somebody that's not themselves. So there was no point. It happened. So, whatever. It's in the past."

Back in 2016, FIVE FINGER DEATH PUNCH guitarist Zoltan Bathory admitted that the Memphis meltdown forced Moody to confront his addictions after years of living as "a functioning alcoholic." "For the longest time, the stage was sacred," Bathory told Kerrang! magazine. "After that incident in Memphis, though, we looked at him like, 'Dude, you've drawn a sword in a church! This is absolutely not okay!' I was pissed. By the time you get to the point we'd made it to, you've basically climbed the Himalayas barefoot. We were planting our flag, and he was too fucking wasted to remember it."

FIVE FINGER DEATH PUNCH's then-guitarist Jason Hook also confirmed in a separate interview that alcohol played a role in the incident, revealing: "For whatever reason Ivan decided to get shitfaced drunk — I'm probably not supposed to be talking about this — but he started to lose his temper onstage towards, basically, the rest of us, being the band… Jeremy decided that he had enough and he got up and left. Well, it's pretty hard to play a concert without the drummer."

This past March, Moody celebrated his third year of sobriety.

In May 2018, Moody told the Green Bay radio station Razor 94.7 that he nearly died due to an alcohol-related seizure and woke up surrounded by EMTs and his daughter holding him while crying. He also admitted that he went to rehab five times before the last time finally stuck.

Spencer, who left FIVE FINGER DEATH PUNCH in December 2018, got clean and sober nine years ago after a particularly bad episode of drug and alcohol abuse, saying that he didn't want to let his parents down after achieving the kind of success he dreamed of as a kid.