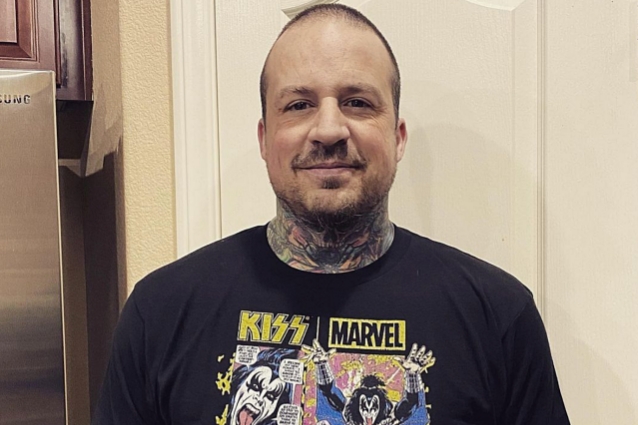 Jeremy Spencer, former drummer and co-founding member of FIVE FINGER DEATH PUNCH, discussed his late 2018 decision to exit the band during a recent appearance on "That Jamieson Show". He said (as transcribed by BLABBERMOUTH.NET): "I had some back issues, and I had to get a couple of surgeries. And the second one was brutal — I had to get disc replacement and fusion. I had deteriorating discs, so it was really painful to play, and I wasn't playing very good. So it was, like, 'I'm not enjoying this. And I don't feel like I'm doing it like I used to be able to.' It's kind of like an athlete when they're aging, and they can't just quite do it like they used to. I mean, the brain's working, but it's just not connecting with the limbs. And I was, like, 'Fuck, man. All right. It might be time to recognize that I need to step off.' So I did."

Spencer, who now fronts his own group called PSYCHOSEXUAL, said that he never intended to completely walk away from writing music and performing live. "I love music, and I was making my own music forever," he explained. "So I've always done that. It's just, as far as that touring lifestyle and that machine, doing what I had to do physically for so long, I had to step off the train, and I had to address the surgeries. And it was really depressing — it was a hard surgery. It was a big setback. I was depressed for a while. It hurts. It's painful. It sucks. I didn't get hooked on pain meds or anything; I would take, like, Advil and shit. But it sucked. And they had to go in through the front and the back, so they took my guts out on the table and everything. It was a brutal surgery."

Spencer recently removed all the previously released music and videos from PSYCHOSEXUAL ahead of the arrival of the band's new single, "Devil From Hell", at the end of the month.

PSYCHOSEXUAL's last release was the covers EP "Songs To Stalk You By", which came out last November. The EP reunited Spencer with former FIVE FINGER DEATH PUNCH guitarist Jason Hook, who contributed solos on the KISS classic "Watchin' You" and QUEENSRŸCHE's "Gonna Get Close To You". The recordings marked the first time the pair had worked together since both parted ways with FIVE FINGER DEATH PUNCH.

Spencer's replacement in FIVE FINGER DEATH PUNCH is Charlie "The Engine" Engen. Engen made his recording debut with the band on the "F8" album, which came out in February 2020.